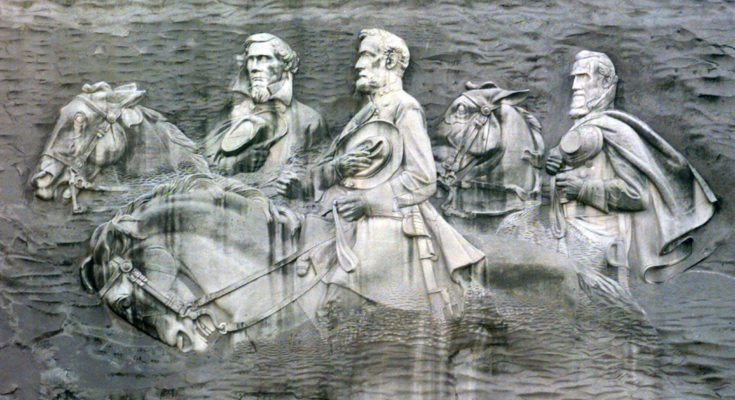 Racism is deeply embedded, even foundational, in the systems and institutions of this world. From education to housing and finance – there is a history of racial and ethnic minorities, especially Black people, being devalued and exploited at every turn. Regardless of socioeconomic status, Black communities are subjected to a barrage of inequities and disenfranchisement like the voter suppression that was so prevalent in the 2018 midterm elections throughout the United States.

So when we talk about criminal justice reform, an effort that would deliver tangible relief to Black people and their families, it is hard for many in our community to see Confederate statues and ideology as comparable or worthy of our attention. One wonders, how would taking down a statue improve my life or how would it benefit our people as a whole? It’s important to understand that Confederate symbols: the statues, the flags, and the monuments are a part of something bigger. They are symbols of a Confederate ideology which is and has always been a white supremacist campaign.

The people responsible for the monuments, the United Daughters of the Confederacy and the Sons of Confederate Veterans, are heritage groups founded after the Civil War to carry on the legacy of their forebears. Not only did they dedicate countless memorials, including the carving on Stone Mountain, they also played a major role in public education. They worked through textbook commissions to rewrite history that has been taught to millions of students- including black children. Rather than admit that slavery was an evil institution that The South fought to maintain, they reimagined the Confederate cause as a Godly, noble, and honorable one to maintain states’ rights. A quick look at primary resources including succession papers and statements from Confederate leaders dispels that myth, but the lies were accepted as truth anyways.

This country has never had a reckoning with racism and has reinvented new systems to oppress Black people. One of the reasons why this is able to happen over and over again, is the actual history has never been widely taught. Confederate mythology combines egregious lies and omissions to maintain White Supremacy. The brutality of slavery was ignored and dismissed, and racism lived on in the Jim Crow South through lynching and the destruction of Black communities.

The lie that slavery was a necessary, benign institution is directly tied to the carving of Robert E. Lee on Stone Mountain and the monument with the Confederate seal in downtown Lawrenceville. These representations tell the public and future generations that the cause of The Confederate States of America was a valid one and the atrocities that they committed were insignificant or nonexistent. We need to dismantle white supremacy and all its trappings. Confederate memorials are a celebration of white supremacy and a flagrant disregard of Black suffering. It is past time to remove these lies carved in stone that should have never been created.

View all posts by Melody Brooks →