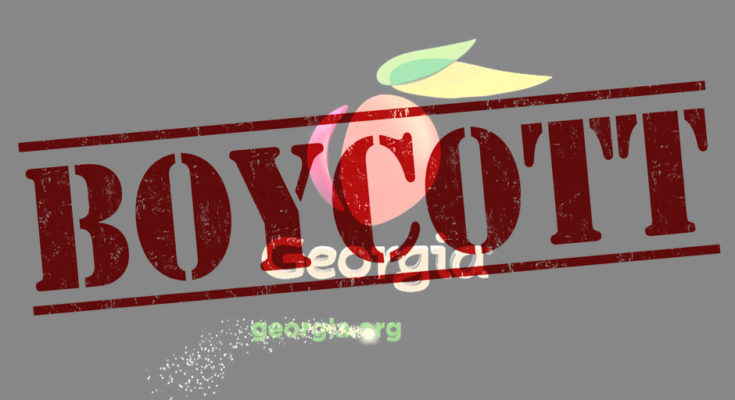 With a very hard fight and over ten days past the election, Democratic gubernatorial candidate Stacey Abrams gave in after being totally out-schemed the GOP way.

Typically it is the United States that rides in on the white horse to enforce democracy and fair elections around the world. But we are talking about an election in the United States. So who can come save us?

There has to be a consequence for the GOP stealing the Georgia election right before our eyes. Yes, an election in the United States stolen in broad daylight.

So what can we the people, we the citizens of Georgia and the country do about it?

Why Boycott the Georgia Film Industry for Change?

Established in 2001, the Urban Mediamakers is a consortium of independent content creators – actors, filmmakers, writers and new media creatives – here in metro-Atlanta, Georgia. As founder/producer of the organization, let me be the first to tell you that I am a 100% supporter of the film industry in the state. But as a native of Georgia born and raised in Atlanta, I know my state – the good, bad and ugly.

The Georgia 2018 midterm election was stolen by the GOP. Period. With a love for filmmaking, voting rights and equity for all people, I support a boycott of Georgia film industry with demands.

There are over 20 productions shooting in Georgia.

Is the entertainment industry willing to support the economy of a totally corrupt state that suppresses democracy; where the winner isn’t the best choice for the people but the best schemer or crook?

If Kemp wins in Georgia, Hollywood should put its money where its mouth is and pull all production out of the state. https://t.co/BKiShMiXTY

Here are a few of my reasons for supporting a boycott of the Georgia film industry.

#boycottgeorgia is horribly misguided. Those of us in the industry fought so hard for @staceyabrams. Having thousands of us lose our jobs and be forced to relocate isn’t the answer. Let’s use our power to stand up to hate and people like @BrianKempGA #FairFightGA

I appreciate the calls to action, but I ask all of our entertainment industry friends to support #FairFightGA – but please do not #boycottgeorgia. The hard-working Georgians who serve on crews & make a living here are not to blame. I promise: We will fight – and we will win.

I admire Leader Stacey Abrams and respect her tremendously. She is the real deal — a true boss and genuine in her passion! But respectfully, Leader Abrams is wrong on #boycottGeorgia. The legal avenue is Leader Abrams’ solution. For the people, the #boycottgeorgia movement with demands will deliver results.

An Economic Boycott With Demands

Hollywood and big budget productions should think twice about supporting and endorsing a state with white supremacy as their proud calling card. An economic boycott of Georgia film industry with demands can bring change for citizens and stakeholders.

It is exciting to be able to call Georgia the #1 film/TV production state in the USA and second in the world! It is exciting to see A- and B-list actors around the city. It is exciting to know that big-box movies are shooting in Georgia. That is a wonderful marketing and advertising tool. But what is the truth behind those words?

White supremacy was the force behind the 2018 mid-term election and voter suppression in Georgia. White supremacy is an ever present element of life in the state. We the people have just witnessed an election for Georgia’s Governor stolen and we should not be back to business as usual.

I stand up against white supremacy. Hollywood should do the same.