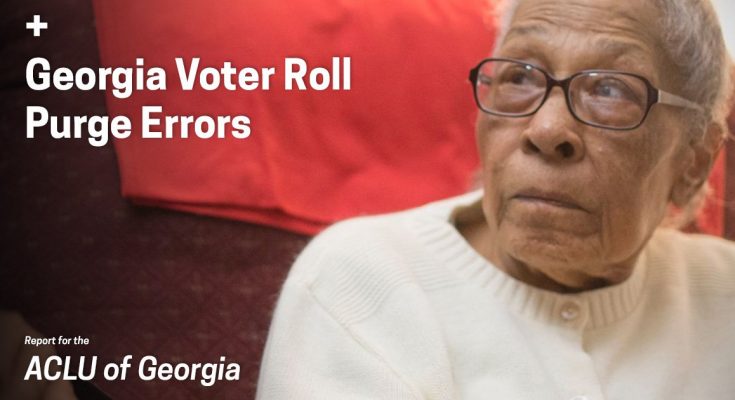 ATLANTA—Today, legal counsel for Greg Palast and the Palast Investigative Fund wrote a letter to the Georgia Secretary of State, Brad Raffensperger, demanding he obtain the list of over 198,000 voters he and his predecessor, Brian Kemp, wrongly purged from the voter rolls—and return these voters to the registration rolls before the election.

The American Civil Liberties Union Georgia issued the report, Georgia Voter Roll Purge Errors on September 1. This report provides detailed evidence by the nation’s top experts in address verification—including the official licensee of the US Postal Service, Merkle, Inc.—who balked at the removal of these 198,351 voters under the false conclusion that these voters moved, justifying canceling their registrations.

Palast, in a letter to Raffensperger today, sent with the legal demand, stated:

“You have had the ACLU’s notification of this horrific violation of voters’ rights for over a month, yet your office has chosen to dodge, weave, obfuscate and prevaricate instead of acting to protect these Georgia citizens. Your office over the past six years has conducted a virtual ethnic cleansing of the voter rolls, capturing victims such as, infamously, Martin Luther King Jr.’s elderly cousin, you’ve wrongly denied the right to vote on the false accusation they have moved from their registration county. King’s cousin, like over 198,000 others, was still living in the home you said she left.”

According to the National Voter’s Registration Act of 1993, the office of the Secretary of State (SOS) must maintain “accurate” voter rolls. The SOS is not at liberty to make voter rolls inaccurate by purging voters based on wrong information and inaccurate methods.

Greg Palast is urging teamwork in his request and is prepared to work with the SOS’s office to restore the accuracy of Georgia’s voter rolls. Palast proposes that:

Brad Raffensperger is fully aware of the purge errors in his registration rolls and the citizens of Georgia, and thus our entire country, are watching to see whether Georgia’s Secretary of State is sincere in taking the necessary steps to make the rolls accurate.

Palast says, “If you are sincere in your concern for these wrongly purged voters, you will contact our counsel today to arrange to get the correct postal and expert information—and let these Americans vote.”

For seven years, Palast has been investigating racially biased voter suppression tactics in Georgia. His award-winning reports have appeared in Rolling Stone, Salon.com, and Al Jazeera. I will be in touch with you shortly to arrange an interview with Greg Palast to help  restore voter confidence in Georgia.

The Palast Investigative Fund is a project of the 501c3 non-partisan not-for-profit Sustainable Markets Foundation. More information can be found at www.GregPalast.com.