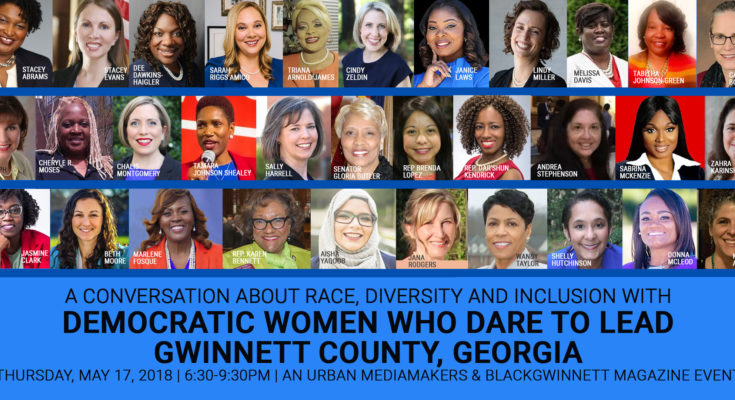 A Relaxed, Interactive Meet and Greet with Group Conversations About Race, Diversity and Inclusion

Heather Caygle of Politico writes, “Women barreled through long-standing barriers on Capitol Hill in 1992, winning elections to the House and Senate in record numbers. And then they were promptly told how to vote by senior male colleagues, ignored in elevators and even turned away at the chamber doors because ‘staff’ weren’t allowed on the floor.

More than a quarter-century after the “Year of the Woman,” women still make up only one in five elected officials on Capitol Hill [and in Georgia]. But this [2018] election cycle, more women are signing up to run for the highest elected offices than ever before…”

And this historic trend of women stepping up to run for office continues right here with Democratic women who dare to lead Gwinnett County. On Thursday, May 17, 2018, Urban Mediamakers in partnership with BlackGwinnett Magazine, invite the public to comemeet Democratic women candidates in a conversation about race, diversity and inclusion. These candidates are on the May 22, 2018 Primary Ballot for Georgia political positions that directly affect the residents of Gwinnett County. ­Join us as we see where these candidates stand on issues including race, diversity and inclusion.

A Meet and Greet Event: Throughout the evening participants will have an opportunity to network and talk one-on-one with candidates about issues including race, diversity and inclusion. This is a fun, relaxed and interactive environment as we talk about serious issues.

Candidate Intros: You will meet women candidates who are running in statewide races and those positions directly affecting Gwinnett County.

Questions from the Public: We have put together a cross-generational panel to ask questions that we have combined in a brief surveyThe public is asked to submit questions for candidates in advance by:

Questions from the Public: The public is asked to submit all questions for candidates in advance by:

All questions must be submitted in advance including up until hours before the event. We will also pull three random questions just before the start of the forum.