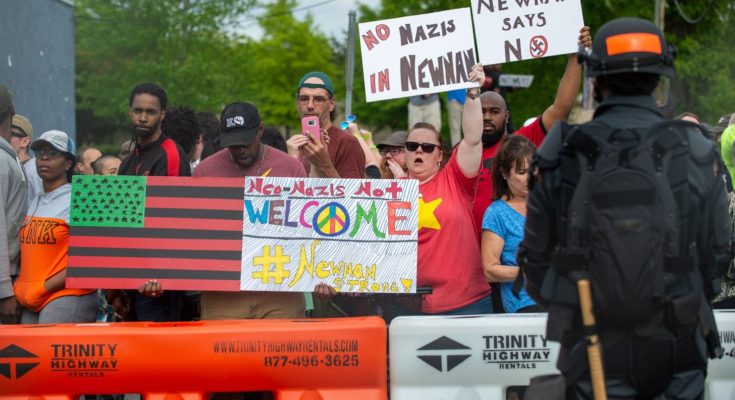 The neo-Nazis were running late, so the counterprotesters began without them, lining the streets of Newnan, Ga., on Saturday afternoon.

The target of their counterprotest was the National Socialist Movement, the neo-Nazis who had planned a public rally. But things quickly went awry for the counterprotesters who were wearing masks or bandannas that concealed their faces — a problem in the eyes of some police officers. About 2:30 p.m., police began to point their guns at a crowd of the anti-racism protesters gathered on a sidewalk.

“State law requires you to remove your masks right now,” one SWAT officer told the crowd, according to video footage from the scene. “You will do it right now or you will be arrested.”

Within minutes, several counterprotesters were in handcuffs. Video footage from the scene showed SWAT officers pulling some counterprotesters off the curb and throwing them to the ground. One man wearing a bandanna over his face was arrested as counterprotesters chanted, “Hands up, don’t shoot!” The officers continued to yell, “Remove your masks!”

More than 700 officers had swarmed the town because of the rally, many of them in full riot gear carrying military-style weapons.

As it turns out, the state law police cited before arresting those protesting racism in masks has a rather ironic origin: It was passed in Georgia in 1951 to combat those promoting racism in hoods.

As the Atlanta Journal-Constitution reported, throughout the latter half of the 20th century, police enforced the Anti-Mask Act against members of the white-hooded Ku Klux Klan in an effort to quell their public gatherings. In more recent years, however, it has been used against masked counterprotesters at white supremacist rallies.

Jeremy Ortega, a 19-year-old charged with a misdemeanor for wearing a mask, told the Journal-Constitution that people were trying to hide their identities to avoid being targeted by the white-power groups. He is among at least 10 counterprotesters arrested Saturday, although not all were arrested for wearing masks. Some were arrested for obstructing a roadway, the Journal-Constitution reported.

The neo-Nazis marched into town wearing all black, bearing flags and yelling “white power,” the Newnan Times-Herald reported. There were no arrests.

Ortega said he is considering a lawsuit against the police.

“They were trying to stop us, and we were trying to dial down the racist stuff,” he told the news outlet. “We were peacefully protesting, yet they put guns in our faces and told us to take our masks off. It made no sense.”