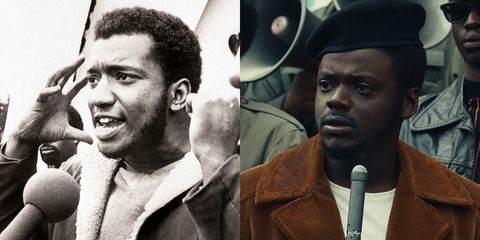 The movie was an excellent history lesson for us all and demonstrates what a menace to the Black community the United States Government and the F.B.I. have been a continues to be for Black activists. This movie debunks all of the lies around the Black Panther Party and how the United States killed innocent people for standing up for themselves and their community.

Excellent acting and cinematography. This is a Black history gem that everyone, regardless of race, should see.

Below is a complete cast guide and a look at how the actors compare to the real people they portray. This article is written by By McKenzie Jean-Philippe for The Oprah Magazine.

The biopic chronicles the life and murder of Black Panther leader and activist Fred Hampton.

Ryan Koogler and Shaka King’s new biopic, Judas and the Black Messiah, hits select theaters and HBO Max on February 12. Decades after his 1969 death, it delves into the remarkable—but short—life of renowned Black Panther Party leader and civil rights activist, Fred Hampton. But beyond his impact, we see the infamous betrayal of William O’Neal, a fellow party member and friend who acted as an informant to the FBI, actively providing information that led to Hampton’s murder at the hands of the government and Chicago law enforcement.

Beyond Black History Month, Hampton’s story offers a lesson on what it has historically meant to stand against racism in the United States. Below, a closer look at the cast and the real historical figures portrayed in Judas and the Black Messiah.

Fred Hampton, played by Get Out and Queen & Slim star Daniel Kaluuya,was just 21 years old when he was killed by the FBI and Chicago’s Cook County law enforcement. Hampton was shot during the early morning on December 4, 1969 when a 14-man police squad raided his apartment while he was unconscious after FBI informant, William O’Neal, drugged him with barbiturates that night. An ardent activist and member of the NAACP in his teens, the government viewed Hampton, the chairman of Chicago’s Black Panther Party, as a threat to the country’s security.

Though the party and Hampton were vocal about their distrust and distaste for the police, Hampton was a strong, natural leader, and orator. The FBI learned from O’Neal that Hampton was set to gain more influence and be promoted to chief of staff of the national Panther party. Despite his young age, Hampton was already a force in the community, forming Chicago’s race-unifying Rainbow Coalition, according to PBS, organizing local rallies, and creating a free breakfast program for pre-schoolers.

LaKeith Stanfield (Get Out, The Photograph, Atlanta) portrays William O’Neal, a former car thief who at the age of 17 in 1966, according to the Chicago Tribune, was recruited by FBI agent Roy Mitchell. O’Neal was tasked with acting as an informant, and soon infiltrated the Chicago Black Panthers, eventually becoming the group’s head of security.

Under the guidance of Mitchell, O’Neal got close to Hampton and provided information that was key to executing the leader’s murder, including a detailed map of Hampton’s apartment where he was killed and drugging him the night of December 4, 1969. Four years later, his role as an informant was publicized and he was entered into the federal witness protection program. He purportedly committed suicide in 1990, per the Chicago Tribune.

Rising star Dominique Fishback, who you might have seen in The Deuce and Netflix’s Project Power, plays Hampton’s fiancee and fellow Black Panther member Deborah Johnson—who now goes by the name Akua Njeri. The then 19-year-old Njeri was lying in bed next to Hampton at the time of the raid and 8.5 months pregnant with their son Fred Hampton Jr.—who still carries on his father’s legacy to this day. Both acted as consultants for Judas and the Black Messiah.

Hollywood veteran Martin Sheen plays J. Edgar Hoover, who led the FBI for 48 years. Hoover targeted both the Black Panther Party and Hampton under his illegal COINTELPRO Program, which targeted prominent Civil Rights leaders like Malcolm X. and Martin Luther King, Jr. In Curt Gentry’s book J. Edgar Hoover: The Man and His Secrets, Gentry says Hoover deemed the Black Panther Party “the greatest threat to the internal security of the country” and dubbed Hampton a Black “messiah” in light of his rising influence. The FBI leader was directly invested in Mitchell and O’Neal’s investigation, signing off on bonuses for both men for their work (according to The Guardian) and taking part in an attempt to cover up the Bureau’s involvement. 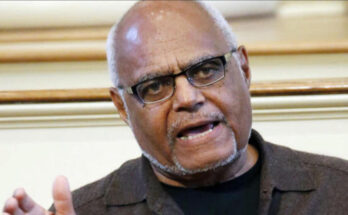