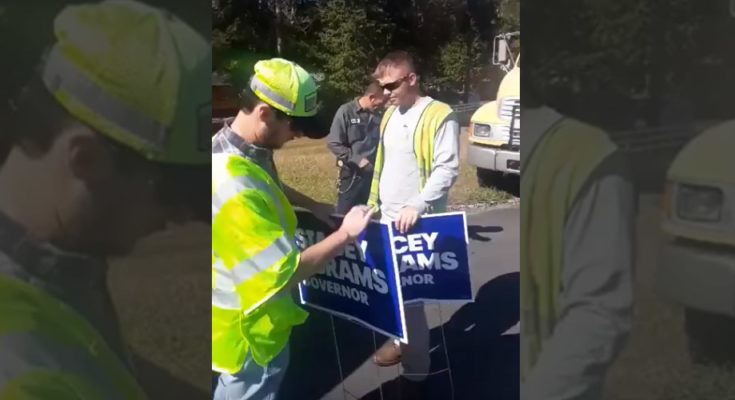 October 31, 2018 – Barnesville, GA :: Are we in a third-world country waiting on the United States to come in and make sure the State of Georgia has a fair election? From Brian Kemp being the Secretary of State and overseeing elections while at the same time the Republican candidate for Governor, to thousands of absentee ballots being tossed out.

I thought we had seen it all.

Now employees of the Georgia Department of Transportation (GDOT) are working hard for Kemp to remove Abrams’ yard signs yesterday in Barnesville, Georgia.

As video documented by Tonza Sheree Thomas in Barnesville, GA, “For No Reason at all the GDOT pulled up Stacey Abrams signs that I put in place. They were harrassing our Canvassers and I kept circling the area. This ain’t My 1st Rodeo and here’s what happened next… Caught Red Handed and it’s Illegal!!!

The video is clear. GDOT are on taxpayer payroll and working hard for Kemp removing Abrams signs. This is a demonstration of institutional racism

This has to be illegal and how can taxpayers get a refund for the time these employees spent rounding up Abrams signs?