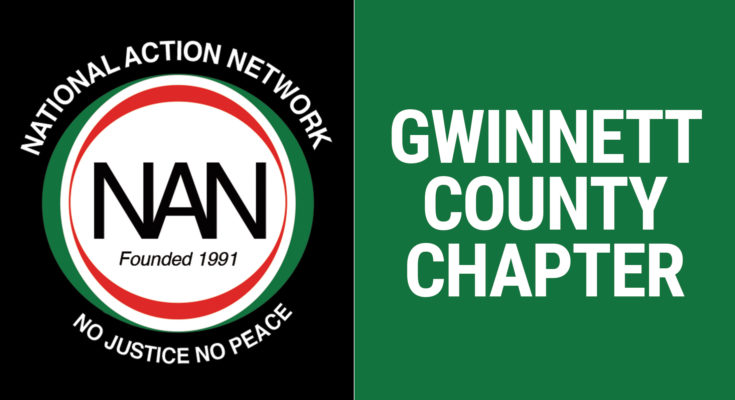 National Action Network (NAN) has starting a chapter in Gwinnett County, Georgia, lead by Cheryle Moses, BeJai Aidoo and Kassandra Williams. NAN is one of the leading civil rights organizations in the nation with chapters throughout the United States. Founded in 1991 by Reverend Al Sharpton, NAN works within the spirit and tradition of Dr. Martin Luther King, Jr. to promote a modern civil rights agenda that includes the fight for one standard of justice, decency and equal opportunities for all people regardless of race, religion, ethnicity, citizenship, criminal record, economic status, gender, gender expression, or sexuality.

Criminal Justice Reform
The right to equal justice under the law should not be conditional or based upon a person’s color or economic status. Over the last two decades NAN has been in the vanguard of the movement to bring such equality to every community that has been unfairly treated. Using the principles of non-violent direct action and civil disobedience NAN has helped to level the field and ensure a measure of justice for those who would abuse their status or seek to dispense justice based upon race or other illegal factors. Racial profiling, stop and frisk policing and police brutality were standard practice in many communities just over 20 years ago. Many of the anti-racial profiling laws on the books today are a direct result of NAN’s commitment to the principles and practices of Dr. King and the tradition of non-violent engagement. Through its advocacy, NAN continues to impact public policy and ensure that government itself is held accountable to the law.

Police Accountability
NAN has been at the forefront of the fight to uphold police accountability, advocating locally and nationally. We successfully worked with the Governor of New York to pass an executive order to require a special prosecutor to be appointed in every case of the shooting of an unarmed person by police. We brought that policy nationwide with the Ida B. Wells campaign, kicking off in California in 2017. We also have worked with the police on local New York issues such as fare evasion, body cameras, and the Right to Know Act.

Crisis Intake & Victim Assistance
NAN has led the fight against police misconduct and other injustices by ensuring that those whose rights are violated are brought to justice. NAN’s efforts were on display in response to events involving the police sodomy of Abner Louima; the police killings of Amadou Diallo, Sean Bell, Ramarley Graham, and Eric Garner among others; and the killing of Trayvon Martin by a neighborhood “watchman.” We also offer legal assistance through Legal Night and referrals to clients through our Crisis Intake and National Crisis Center, headquartered at our House of Justice in Harlem.

Voting Rights
NAN works to ensure that every vote in every community across the nation is counted. NAN is leading the fight against voter suppression and voter ID laws and in 2012, NAN led a voter engagement tour to register and educate voters. In 2014, only 36.4% of voters turned out to midterm elections, compared to 40.9% in 2010. Especially during this administration, the swell in political action and mobilization around congress and legislation is moving quickly. As we enter 2018, a midterm election year, we will fight to insure that every person’s right to vote is protected and exercised. As Dr. King said in 1965 in Montgomery, “The Civil Rights Act of 1964 gave Negroes some part of their rightful dignity, but without the vote it was dignity without strength.”

Corporate Responsibility & Pension Diversity
NAN has made corporate responsibility, inclusion, and diversity an important part of its platform and through its pension diversity campaign and NAN’s Madison Avenue Initiative. In 2017 NAN launched a campaign to increase diversity in the contracts for control of our pension funds. We have worked extensively in New York with both city and state comptrollers, and have targeted some of the largest investment firms in the nation. NAN has also made sure that Black media entities, television, radio and marketing firms get their fair share of advertising dollars, contracts and procurements. The largest ever deal NAN negotiated was with the NAACP and National Urban League resulting in an agreement with Comcast and NBC Universal to expand current diversity initiatives resulting in four Black and Latino television stations, the biggest civil rights agreement in our time with major broadcasters. The MOU (Memorandum of Understanding) improved diversity in the areas of corporate governance, employment/workforce recruitment and retention, procurement, programming, and philanthropy and community investments.

Youth Leadership
NAN puts youth and young leaders at the forefront of the movement for Civil Rights. Initiatives including NAN Youth Huddle, NAN Youth Move and the NAN Campus Ambassador program seek to lift up the voices of our young people so that they may lead the fight for the next generations. With leaders ages 11 to 25 we never leave out the passionate and visionary voices of our youth.

Bridging the Digital Divide
Through NAN’s Newark Tech World and tech center at the House of Justice, and work of NAN chapters such as Gwinnett County, NAN offers programs to help our membership and community bridge the gaps in the world of technology. We work to make sure that young and old alike are adapting to the future ahead and can be competitive members of the workforce. Working with beginners to advanced, we host multiple hackathons and technology 101 classes to make technology accessible to everyone.