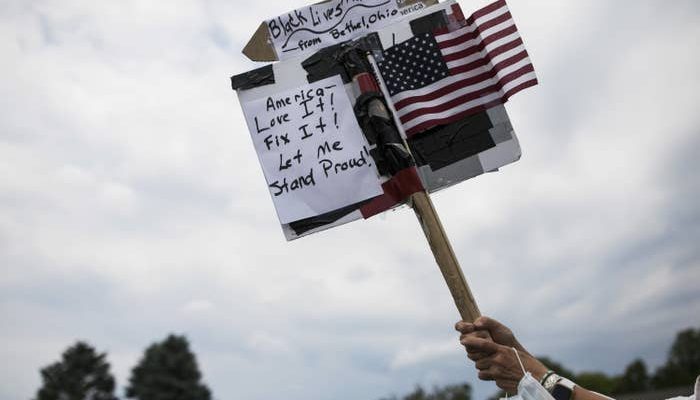 Lois Dennis started teaching second grade in the village of Bethel, Ohio — official population just under 2,800 — back in 1976. People in town call her Mrs. Dennis. And that’s the name people used online when they started denouncing what happened that Sunday afternoon in June when Bethel made national news for an explosion of violence on its streets: I can’t believe they did that to Mrs. Dennis.

Lois’s adult daughter, Andrea, was visiting from Chicago. Earlier in the week, they’d heard that local substitute history teacher Alicia Gee was planning a small demonstration in Bethel in solidarity with Black Lives Matter. They made some signs on poster board, and Lois put on a blue T-shirt with “I TEACH” and the Superman logo.

They parked at the middle school and began walking east on Plane Street, the main thoroughfare through the village. “That’s when we were accosted by the counterprotesters,” Andrea recalled. “They started pushing us, being aggressive, yelling at us. We couldn’t believe it. We were stunned.”

On one side of the street, they saw around 50 Bethel residents — teachers, city council members, hairdressers, retirees — who’d shown up for the BLM demonstration. On the other, there were hundreds of people, including representatives from four different biker gangs, who, at the invitation of a local construction worker, had come to “protect” the town from looters and rioters and rumored antifa. Ultimately, the number of people “uptown,” as Bethel residents refer to the center of the village, swelled to over 800.

Watching footage of the day, you can see the energy grow darker and heavier. You can hear a man yell “you came to the wrong fucking town,” a woman scream “you’re supporting the goddamn niggers,” another man threaten to “break your fucking jaw, bitch.” You can see rifles and handguns and a literal bag full of baseball bats. You can see a woman in a pink sweatshirt repeatedly calling a Black woman the n-word. You can see people grabbing sign after sign from the pro-BLM demonstrators and ripping them to shreds. You can see a biker come up behind Nick Reardon and punch him directly in the skull. And you can see the police officers watching the encounter do nothing.

“People were screaming at us to go back where we came from,” Anwen Darcy, who attended the demonstration with her mom and sister, recalled. “But I was looking around, and I saw Mrs. Dennis, who’d been a teacher for 30 years. I saw my mom, who’d been on the PTA for years and served as the drama director. I saw the woman who ran all the prom fundraisers and a city councilman. The people yelling at us weren’t from here, because if they were, they would’ve known we were home.

When Lois and Andrea first entered the scene, someone yanked Lois’s sign and tore it in half. She didn’t recognize that person, or any of the others pushing her around. But later, once she’d made it to the rest of the demonstrators, she looked across the street. Like everyone else, she saw people she knew. She got in a “stare down,” as her daughter later described, with one of her former colleagues.

“Lois, I cannot believe you’re here,” the other teacher yelled.

Andrea and her mom knew it was time to go. When they arrived home, Lois walked straight to the backyard to debrief with her husband and drink a glass of water. Andrea thought her mom would be mad at her. But Lois was resolute. “I wanted to be there,” she said. “I needed to be there.”

Lois Dennis needed to be there, she later told me, because when she was a kid, growing up 30 minutes away in Ripley, Ohio, she would spend her summers at the local pool. From that pool, she could see a nearby hillside. And on that hillside, silently watching the kids in the pool, were her Black classmates. The schools weren’t segregated. But private pools still could be. “I never questioned or asked why. That’s why I want to stand with Black Lives Matter — that sort of quiet racism, that’s accepted for so many years, and never questioned.”

A lot of people have stories like Lois’s. Some of those stories are about how a place like Bethel, whose official slogan is “small town, big heart,” have ignored or left unexamined years of overt and covert racism. But others have different stories: of what it felt like to be the only Black person, the only Filipino family, the only mixed kid in your class. Stories of isolation, and fear, and of trying to make yourself invisible.

The people who showed up to “protect” the town say a Black Lives Matter demonstration doesn’t belong in a place like Bethel, Ohio. There’s no need, they say, for those sorts of conversations. Others blame the demonstrators for giving Bethel a bad name: for the dozens of articles in the national press, the outsiders flooding local Facebook comment sections, the Wikipedia entry for the village briefly changed to describe it as “composed of many, many racists.” After what happened on June 14, the village instituted a curfew — the first anyone in town can remember.

“I’ve known Lois Dennis and her husband my whole life,” Andrew Stober, who runs the Facebook Group “Bethel Bitching Together,” told me. “I love them and respect them. But was it really the right thing to do, bringing that protest here? It’s okay to have one of those in the city, but in a predominantly white town — what they were doing was basically doing was inviting racists in.”

If there hadn’t been a protest, the reasoning goes, there wouldn’t have been a problem, and everything in Bethel would’ve been like it always has been: just fine. But what happened on that Sunday afternoon showed just how unsustainable that belief has become.