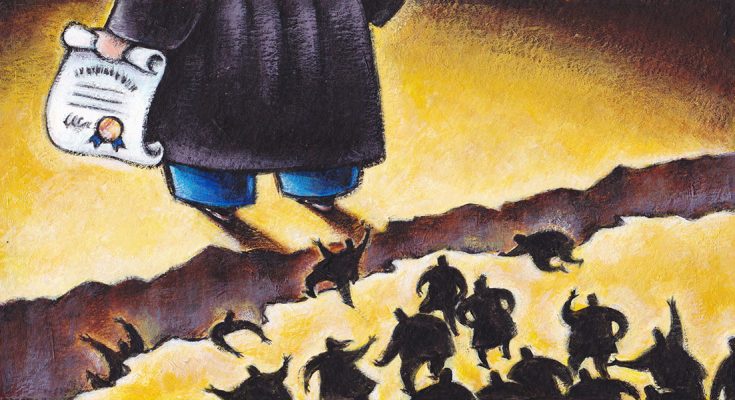 For the average black and/or brown-complexioned person living in the U.S. and tens of millions more living in other countries throughout the world, recent news events have not only been emotionally unsettling, but almost inconceivable to comprehend. Thereby, leaving many to wonder when is enough going to be enough? Known are the countless unpleasant experiences from the past which have already left most such people with a deeply bitter taste in their mouths. They have scars on their souls when it comes to routinely being forced to tolerate further inhumane treatment from people of white or other ethnic groups who (whether they recognize it or not) all too often have the luxury of utilizing their privilege card as a VIP/All-Access credential reserved exclusively for figures of status. This leaves many people to question, when is enough going to be enough?

It’s been no mystery that for decades many non-blacks (although certainly not all) in leadership or authoritative positions have used, abused and confused black and brown people for their own financial gain through a number of questionable methods.

Public school systems have been set-up for failure from the beginning. Curriculums are grossly out-of-touch with reality as ongoing generations of children from urban communities continue to be taught outdated (and debatably incorrect) information about the past, as well as what life is potentially going to look like unless something drastic changes to alter the course of their future. On the other hand, suburban area charter schools, private schools and online programs offer curriculums that are geared more towards prepping their students for success in adulthood. Suburban area charter schools teach elementary and middle school children at an early age about everything from financial literacy, software coding, advanced science, fundamentals of business and more from unique learning experiences (often conducted in the field). Public school systems remain stuck in steering youngsters into non-progressive coursework like cosmetology, baking-culinary arts, manufacturing and other career-limited programs which they often only gain access to in their final year or two of high school. Yet, we wonder how have children who attend public school systems become so ill-prepared for the years ahead? How are urban children being funneled along through the school-to-prison pipeline in America?

If that has not been enough, then hidden agenda-laden decision-makers have succeeded in turning young poor black mothers against young poor fathers and vice-versa. All in the name of “public (government) assistance” – where such non-blacks have created secure, lengthy careers for themselves as case managers, prosecutors and more while profiting from pushing for child support cases to be criminalized, incarcerating many for nonpayment. Even though research proves the problem is not that most fathers or mothers who are expected to pay support refuse to do so, but instead, the problem is most were/are financially unable to pay anything substantial in the first place because they simply lack it to give.

Thereby, this system strategically continues to aggravate contentious situations between couples who already were/are enduring challenges which the system only makes worse. Despite such unnecessary interference, enough has not been enough. This is the same system that fails to acknowledge publicly that much like the largest recipients of public assistance (welfare/government programs) are overwhelmingly poor white Americans, the majority of people who are ordered to pay child support are white Americans too.

However, you do not see them being given career-damaging record convictions for nonsupport. They are not the majority of those shipped off to jail-prison in great numbers or thrown on probation for the inability to pay. Instead, the decision-makers either:

Instead, Black and brown people feel pressured to oftentimes turn towards crime as the only foreseeable option available.

While most discriminatory-thinking people would prefer to ignore it, the sad reality is from the cradle to the grave, the unnecessary obstacles routinely placed before a black or brown person are insurmountable and never-ending. For generations, power-thirsty officials in decision-making capacities have thrived. They have used an inter-related legalized process and system as a lethal method for county and state governments (and corporations) to share millions of dollars annually from free labor. This free labor is provided by forcing millions of black and brown men, women, and teenagers to be incarcerated for nonviolent offenses that rightfully should not even lead to jail, prison, or a criminal or civil conviction. (Research the ‘Convict Leasing System.’) Another common strategy used to keep people oppressed has been forcing people to pay a fee while being on probation or parole, which has certainly added insult to injury.

Now that a few of the main pain points have been identified, the question remains…what are we going to do about them as an entire community? White people cannot make America a better place by themselves – contrary to what Donald Trump and his short-sighted followers might think. In that same manner, black and brown communities can not make it better either by standing alone and divided, nor can they improve their conditions by killing each other at rates far greater than those killed by the police. Human beings were created to be a “help mate” to each other…not a hinderance, regardless of our shallow differences in color, religion, socioeconomic status, education, culture or anything else. At the end of the day, there has yet to be a Brinks truck packed full of money following a funeral procession or a dead body that will make it into Heaven with a coffin full of cash. Instead, our admission ticket to the next realm is determined by the genuine deeds we have done or failed to do for disadvantaged people during our lifetime here on Earth.

For America to realize its true capabilities we have the potential to achieve, there continues to be a great need for truth and reconciliation. In doing so, that means offering black and brown communities something far more meaningful and tangible than an olive branch in the form of rhetoric or another worthless taking a knee gesture by a politician or police official. Instead, that comes in the form of putting some skin in the game by contributing to and supporting economic empowerment opportunities to help less fortunate people. Re-directing taxpayer dollars by cutting overly inflated public safety department budgets, and allocating such funds towards strengthening communities and neighborhoods of color by funding urban-based business initiatives by providing such start-up businesses with direct access-to-capital and effective business education mentorship programs is a move in the right direction. Add to that a revamping of the entire educational curriculum of public education systems which includes teaching children applicable skills relevant to real life beginning in elementary school to the point of high school graduation.

Advocate for state legislators to de-criminalize child support by making it a civil issue as opposed to a criminal one. Help people to become gainfully employed and self-sufficient so they can help support themselves, their child(ren) and their local community. Create better tax incentives for small and mid-sized companies who agree to train-employ less educated or economically-challenged citizens as opposed to continuing to force such people to face a Debtors’ prison situation. If people are being sent to jail-prison and given convictions for child support, will the day come when people who are financially unable to pay college tuition debt, credit card debt or medical debt also face the same or similar circumstances?

Since poverty and hopelessness are the mother and father of criminal activity, and idle time and pressure are its siblings, consider following the path of other progressive thinking cities-states like Evanston, Illinois. In Evanston, local leaders brilliantly agreed to allocate $10 million dollars over the next 10 years from cannabis tax revenue to address reparations involving racial disparities impacting their black community.

Last, but certainly not least, do something effective to capture the untapped talents of people who are ex-offenders in every city-county-state instead of continuing to force these people to face a bleak future of ongoing failure. Ex-offenders who become gainfully employed with a living wage-paying job can do a lot more for a city-county. These returning citizens can become a tax-paying resident, home owner/property owner, small business owner and more in comparison to someone who is banished and neglected like members of an infectious tribe.

Today, America has a great opportunity to make amends for its hurtful past. Unlike most historians who have altered the truth, we can accomplish a lot more together than we can apart. A nation’s past can define our future if we learn from the mistakes of those who preceded us. Will people throughout the U.S. be willing to re-write what takes place from the present going forward with much better decisions or will we continue to remain a nation divided by ignorance?

Santura Pegram is a freelance writer and socially conscious business professional. A former protégé-aide to the “Political Matriarch of the State of Florida” – the Honorable M. Athalie Range – Santura often writes on topics ranging from socially relevant issues to international business to politics. He can be reached at: santura.pegram@yahoo.com