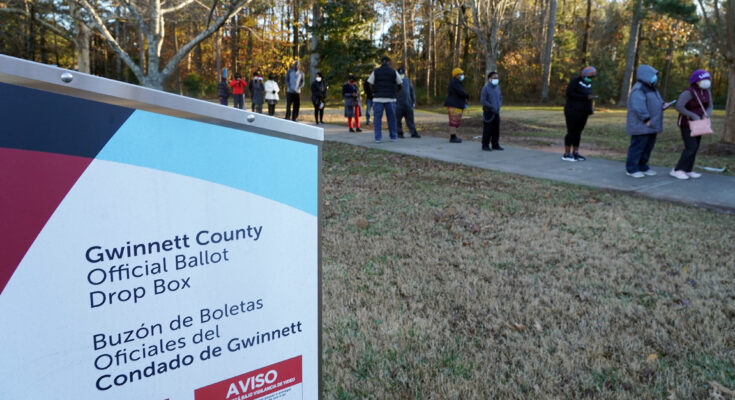 Duluth, Georgia | In 2018, Democrat Marlene Fosque made history by becoming the first Black Gwinnett County Commissioner. Two years later, voters turned the whole board Democratic, too. All the members were suddenly people of color. Typically, local elected officials in Georgia draw their own district maps after the census. The Legislature just rubber stamps them. So it was a surprise to Fosque when Republican lawmakers intervened and drew their own maps for several of Georgia’s diversifying counties. In Gwinnett, Republicans redrew the territory Fosque represents. They made the seat whiter and more likely to elect a Republican by packing more voters of color into the other districts.

State Representative Sam Park, a Democrat, tried to stop that map. “It really dilutes the political power of Gwinnett voters of Black, Hispanic and Asian American communities, and it undermines their freedom to ultimately vote for their elected officials of choice,” said Park.

Park became the first Asian American Democrat elected to Georgia’s Legislature when he unseated a Republican in 2016. By 2020, this once-Republican county helped propel Joe Biden to victory in the state. Like Georgia, Gwinnett has kept diversifying, racially and politically. Park says that’s why the Republican-controlled Legislature stepped in – not just gerrymandering maps for the state House and Congress, but for local offices, too.

“When all is said and done – being driven by a lot of fear that is harbored by folks who maybe are concerned that the changing demographics of Gwinnett is now being reflected in elected officials at the state and local level,” continued Park.

The fact is, Republicans control the Legislature, and the Legislature has the final say on redistricting maps. Still, the Voting Rights Act forbids drawing districts that dilute the voting power of minorities. According to Michael Li, a redistricting expert at the Brennan Center, “Untangling race and politics is one of the hardest things that courts get asked to do, and it’s particularly hard in the South where race and politics overlap to a very large degree.

Li says Gwinnett County is a microcosm for how Georgia is navigating shifts in demographics and political power. “Some of the biggest battles around redistricting this cycle are going to be in the rapidly changing suburbs of the country, particularly the suburbs of the South,” said Li.

Georgia Democrats and voting rights groups talked about challenging the new map in court. But the primary is May 24, so candidates like Gwinnett Commissioner Marlene Fosque acknowledge that trying to win in the Republican-drawn districts is their only option to keep their seat at the table.

Read and listen to the original report – https://www.npr.org/2022/03/31/1089885271/one-of-the-countrys-fastest-changing-political-landscapes-is-in-suburban-atlanta.