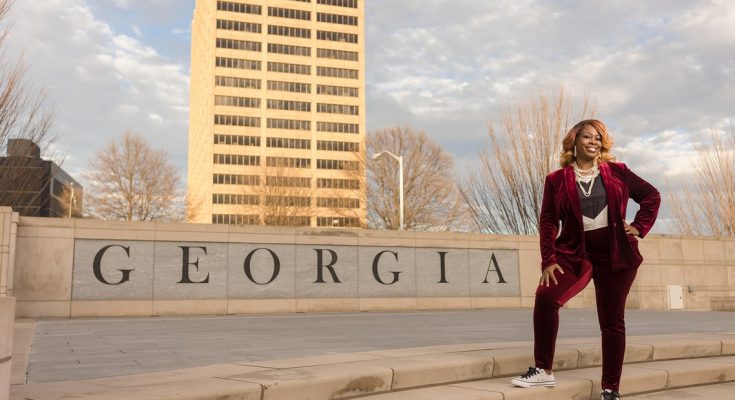 Not many forces work harder than Black women leading a movement. From the fight for suffrage to today’s battle against voter suppression, Black women have been the backbone of political progression, even when they don’t get the return on investment they deserve.

The tide is beginning to turn in their favor, however. In 2020, America elected Kamala Harris, the first female vice president, and sent more Black women to Congress than ever before. The most recent elections also confirmed Georgia as the battleground state that local organizers knew it was, resulting in a 50-50 split in the Senate between Democrats and Republicans.

“Black women are the architects of our democracy, and they’ve been doing that since the suffrage movement,” said Glynda Carr, CEO and co-founder of Higher Heights, a political action committee dedicated to electing more Black women. “At that movement-building table, knowing they weren’t going to reap the benefits of the 19th Amendment, they knew that they were building the foundation literally for the modern-day Black women activists of 2020.”

The road to attaining political power has been long for Black women. In 1913, the founders of Delta Sigma Theta Sorority Inc. marched in the back of the Suffrage Parade in Washington, D.C., behind a sea of white women who spat at them and called them racist slurs. In 1962, Fannie Lou Hamer, a Mississippi Delta woman who had been given a hysterectomy without her consent the previous year, was fined by the police and fired from her job for leading a group of 17 people to register to vote. Two years later, she co-founded the Mississippi Freedom Democratic Party to fight the efforts of white Democrats to block Black voter participation. She also launched Freedom Summer, which brought college students to the South to help get Black people registered to vote. In 1968, Shirley Chisholm became the first Black woman elected to Congress and four years later she became the first woman and the first Black person to seek a major party’s nomination for president.

Those moments and more laid the foundation for today’s movement. In 2020, Stacey Abrams, LaTosha Brown, Nsé Ufot and so many other Black female organizers and voters stood on the aforementioned historymakers’ shoulders to kick a fascist president out of the White House. These women have been working tirelessly for years not only for a more equitable society, but also simply for the right to ensure their votes count. They mobilized and engaged voters in record numbers because the fact is that when Black women fight, they are fighting for their lives and the lives of those who look like them.

It hasn’t been easy, especially since the dismantling of the Voting Rights Act. In 2013, the Supreme Court struck down Section 4(b) of the landmark 1965 legislation, freeing a number of states to enact discriminatory changes to their voting laws without the burden of obtaining federal pre-approval. This has resulted in polling place closures, the resurrection of voter ID laws and other barriers to voting that directly affect Black people. With the 2016 election there also came an ugly rise in the myth of widespread voter fraud, stoked by President Donald Trump.

In combination with the Supreme Court’s decision, voter fraud conspiracies helped fuel the injustice Abrams faced during her gubernatorial campaign in 2018 against Brian Kemp, then Georgia’s secretary of state and thus the man in charge of running the state’s elections. In that role, Kemp canceled the registrations of more than 1.4 million inactive voters; more than 668,000 of those were canceled in 2017. Leading up to the election, the state put 53,000 voter registrations on hold for additional screening, most of which involved Black voters.

It was far from a fair fight. Because of voter suppression, many say that election was stolen from Abrams.

She refused to concede.

Media speculated she would run for a Senate seat or become President Joe Biden’s pick for vice president. Instead of seeking a cushy seat at the top, however, she forged a path forward by mobilizing voters on the ground. In 2018, Abrams founded Fair Fight Action, an organization helping Georgia residents to secure their right to vote. With it, she mobilized efforts to combat voter suppression.

Other organizations were in the ring with Abrams, fighting for voting rights at the state and national levels. Black Voters Matter, founded by LaTosha Brown and Cliff Albright, registered voters across the South and advocated for policies that expand voting rights. The New Georgia Project, of which Nsé Ufot is the CEO, registered more than 500,000 voters in the state.

“I THINK THAT BLACK WOMEN, LIKE anybody ELSE, WANT TO BE ABLE TO JUST GET OUT OF SURVIVAL MODE & KNOW WHAT IT LOOKS LIKE to thrive. AND THAT IS NOT EASY.”
— Nsé UFOT

“The work of making America live up to its promises, the work of making this democracy real — I think that it’s hard work. It is often thankless work, and it’s super necessary. This is what we do in defense of ourselves, our families, our communities,” Ufot told HuffPost. “I think that Black women, like anybody else, want to be able to just get out of survival mode and know what it looks like to thrive. And that is not easy.”

In 2020, voters had to face another big obstacle to get to the ballot box: COVID-19, a deadly illness that has claimed more than 400,000 American lives and disproportionately impacted Black people.

“We couldn’t organize the same way that we organize in regular elections,” Brown said. “Think about the extraordinary barriers that we had to overcome — think about the extraordinary amount of pressure from voter suppression that we actually had to face and to deal with — and still make history and show up and show out in record numbers. Is there any doubt that Black voters matter in this country?”

Even with the recent and longstanding challenges, Black women are finally seeing a return on their investment. Rep. Marilyn Strickland, the first Black elected member of Congress for the state of Washington and one of the first Korean American women elected to Congress, is a testament to that. Strickland told HuffPost that she would not have won her seat without the support of Black women.

“We’re the base of the party. We do a lot of heavy lifting,” Strickland said. “But it often feels as though we’re also taken for granted, and so as a person of color, as a woman who is Black in Congress and thrilled to serve with other smart Black women, we have an opportunity to create an agenda and to really move things forward that will benefit us.”

Rep. Cori Bush, the first Black woman elected to represent Missouri in Congress, has vowed to work to change that. Bush told HuffPost that she’s working to pave a way in St. Louis for Black women to be “protected, not just thanked.”

“Black women are constantly picking up the pieces of our broken systems, despite going through trauma upon trauma in the process,” Bush said in a written statement to HuffPost. “We’re the organizers who won this election in the face of discrimination, we’re a disproportionately high number of the workers who have lost their jobs during the pandemic, and we’re the activists leading the fight for Black lives.

“For too long, we’ve labored for our country without reaping the rewards,” she continued. “We’re thanked for delivering an election in a year where no Black women were elected to serve in the Senate. We’re appreciated for being essential workers, but when we get sick, doctors don’t understand our pain. We’re applauded for being activists in a year where Breonna Taylor was murdered without receiving justice. We’re appreciated for our power with words, but too rarely is that matched by actions.”

The United States has unhealthy expectations for Black women. Instead of looking to everyone to pull their weight and use their resources to build a better democracy, politicians often expect greater responsibility from Black women. Carr said that this isn’t sustainable and that a healthy democracy can’t lean on Black women always saving the day.

“So, I certainly believe that we need to have a conversation with our neighbors and our counterparts: We can’t put more into the democracy than we get back. We certainly shouldn’t expect to be putting more into this democracy that benefits all,” Carr told HuffPost.

Black women in political organizing also need a chance to rest, she said. On Jan. 6, these women should’ve been celebrating the fruits of their labor in Raphael Warnock and Jon Ossoff’s Senate victories. Instead, they watched as hundreds of insurrectionists stormed the U.S. Capitol, incited by Trump and his claims that an election he lost was actually stolen. During the congressional proceeding that led to him becoming the first president in U.S. history to be impeached twice, Rep. Cori Bush (D-Mo.) made an impassioned call for Trump’s removal.

“BLACK WOMEN ARE ACTUALLY STARTING to USE OUR POWER for OURSELVES, FOR THE ELEVATION of OUR OWN VOICES. WE’RE also USING OUR POWER not JUST TO ENGAGE OUR communities, BUT TO ALSO CREATE LEADERSHIP SPACE.”
— LaTosha BROWN

Bush and every other Black woman in the House of Representatives voted in favor of Trump’s impeachment. They finished what Rep. Maxine Waters (D-Calif.) started in April 2017 when she became the first member of Congress to call for his impeachment.

Black women have always had the foresight and wisdom to lead the charge politically. This isn’t new. What is new, Brown told HuffPost, is the space that they’re creating to unapologetically advocate for their own power.

“Black women are actually starting to use our power for ourselves, for the elevation of our own voices. We’re also using our power not just to engage our communities, but to also create leadership space,” Brown said.

“Sometimes we’ve advocated for power, but we allowed ourselves to stand in the back and we let others be out front. And there’s nothing wrong with that. But I think what is a distinctive difference in what you’re seeing now at all levels of the political process, there were Black women that were leading the helms.”