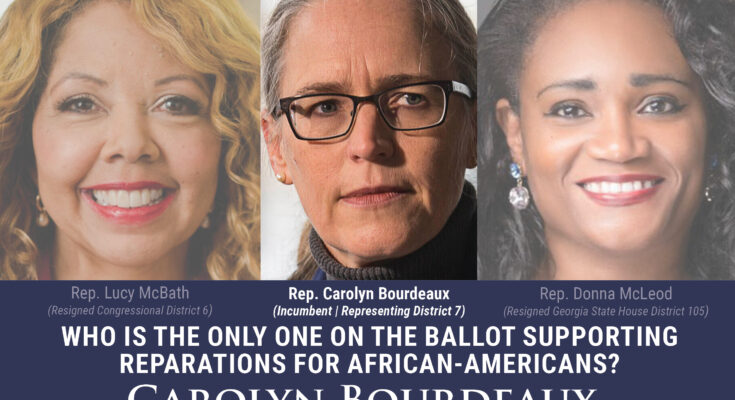 Rep. Lucy McBath is Black, selfish, and a coward. She resigned from her 6th Congressional District position, abandoning her constituency to run in the 7th. She did not have the guts to fight against the GOP. She left the 6th District open for a GOP takeover. Sadly McBath loss her son to gun violence, but she cannot run her political campaign on that forever. McBath seems only concerned with personal things. Reparations is personal for many Blacks — the majority-minority in the 7th District. But McBath DOES NOT support reparations for African-Americans.

Rep. Donna McLeod is a Black Jamaican who resigned from Georgia State House District 105 to run for 7th Congressional District. An ambitious and aggressive candidate, McLeod proudly boosts that she DOES NOT support reparations for African-Americans. Does McLeod have a disdain for African-Americans and/or a misunderstanding of why reparations is important to many voters in the district? Voters should never select a candidate simply based on race, but should make a decision based on who will represent their interest best.

Rep. Carolyn Bourdeaux is white and is the incumbent for the 7th Congressional District. She was able to flip the district from Georgia GOP control in 2020. Bourdeaux has been in Georgia public service for years, and an expert in public management and policy. She represents all voters of the district, and recognizes the trauma of USA’s slavery past, and social injustices. Bourdeaux is endorsed by Andrew Young, and she DOES support reparation for African-Americans. We are voting for CAROLYN BOURDEAUX! So should you!