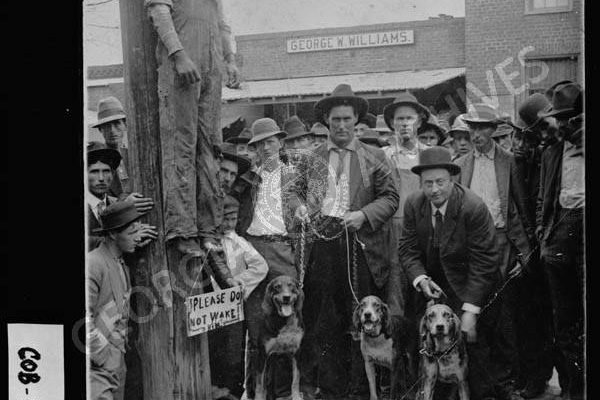 By By Arielle Kass, The Atlanta Journal-Constitution

For the first time in living memory, Gwinnett County commissioners this week acknowledged the lynching of Charles Hale 110 years ago in Lawrenceville’s downtown Square.

The recognition came days before a 10 a.m. Saturday ceremony where volunteers will collect soil at the site of the 1911 lynching, sending some of it to an Alabama memorial and keeping some in Gwinnett, to help mark a violent side of local history.

Ray Harvin, the facilitator of the Gwinnett Remembrance Coalition, said the recognition was “huge.” Also a big deal: Researchers have finally identified a relative of Hale’s, a niece who called his wife, Willie Williams, an aunt.

The couple had a daughter, Sarah, before Hale’s death, but neither she nor any possible descendants have been identified.

Until earlier this year, members of the coalition had not known what happened to Williams, who Harvin said was 20 years old when her husband was pulled out of a Lawrenceville jail in April 1911 and lynched by a mob of more than 200 people. Now they know she moved to Atlanta, remarried and died in 1981.

“To connect the dots, it’s significant,” Harvin said. “It will help us tell the story beyond June 19th.”

The date, Juneteenth, marks a new federal holiday to celebrate the end of slavery, and was chosen for the soil collection because of its larger significance.

“They didn’t know all the facts,” he said. “It was better not to revisit it; there’s no good in it.”

But now the family intends to help keep Hale’s memory alive, and will participate in the ceremony this weekend.

The soil collection, led by the Gwinnett Remembrance Coalition with the participation of Gwinnett County, Lawrenceville and the Gwinnett Historical Restoration and Preservation Board, is just one part of a process to ensure Hale isn’t forgotten by history. Dirt where his blood was spilled will be housed at the new Lawrenceville branch of the Gwinnett County Public Library. Formerly the Hooper-Renwick School, it was long the only public school in the county for Black residents.

It will also go to the Legacy Museum, near the National Memorial for Peace and Justice in Montgomery, Ala. Run by the Equal Justice Initiative, the museum houses soil from other areas where lynchings occurred. The group also works to erect public markers to memorialize lynching victims.

Harvin said that process is already in the works.

The proclamation, issued Tuesday by Gwinnett County commissioners, enumerated the ways in which lynching Black residents upheld white supremacy, terrorized residents and inflicted trauma on entire communities. There were at least 594 recorded lynchings in Georgia.

Hale, who was accused of assaulting a white woman, never had the chance to defend himself against the accusations before he was hanged from a telephone pole at the intersection of Perry and Pike streets in Lawrenceville. People came by to take photographs and a postcard was made of the lynching.

No one was charged with his killing.

Read the full article at https://www.ajc.com/news/atlanta-news/gwinnett-county-acknowledges-lynching-in-1911-before-memorial/QJVV4DRX3BAVBFOPYSK2G7M5VM/