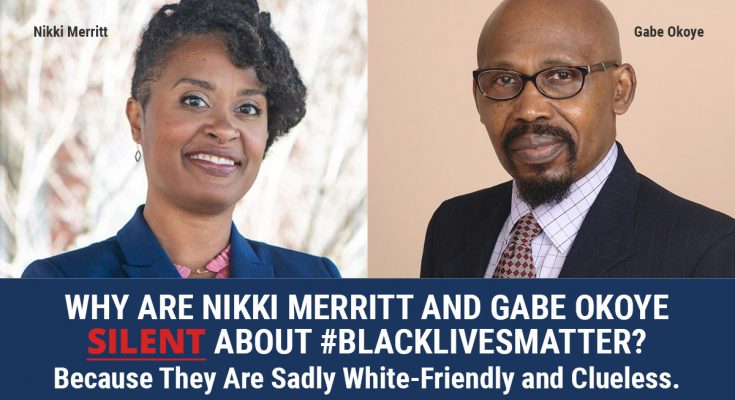 Because They Are Sadly White-Friendly.

OPINION: I am Cheryle Renee Moses, the outspoken, truth-speaking-to-power Blacktivist who was a candidate for Georgia State Senate District 9 in the June primary to represent Dacula, Grayson, Lawrenceville, Lilburn, Loganville, Mountain Park and Snellville. I am proud of my endorsements including Black Gwinnett Magazine. Although the vote counting process continues to be questionable, I did not make the runoff.

The Georgia Senate District 9 runoff is Tuesday, August 11, 2020 with candidates Nikki Merritt and Gabe Okoye. In the moment of George Floyd protests to address racism and the #BlackLivesMatter movement, Merritt and Okoye have been silent on the topic.

Because they are sadly white-friendly.

White-friendly is an African-American/Black/non-white person who bows down to white privilege and supremacy. White-friendly Blacks are non-threatening to white people and will not do anything that the ‘good white people’ may not like. Merritt and Okoye are afraid to speak truth to power or speak up for Blacks, about #BlackLivesMatter and/or racism that flows through Gwinnett County, Georgia, the USA and the world.

If Merritt and Okoye are afraid to speak up/out about #BlackLivesMatter right now during this global movement to fight racism, they will continue to be silent on issues affecting the Black community if elected to office. The establishment of Gwinnett and Georgia also know this fact.

A Choice Between Bad and Worst

Merritt and Okoye are white-friendly – a detriment to the Black majority-minority community of Gwinnett County and Georgia.

The bad is Okoye. He bragged that he was the first leader of the Gwinnett County Democratic Party to ever reach out to Black churches in the community. I told him that was nothing to brag about because campaigning 101 in a Black community means going to Black churches. (It also showed how the Gwinnett Democratic Party had for decades ignored their most valuable minority voter.)

Clearly Okoye is clueless to the basics of Democratic community Get-Out-The-Vote efforts in the African-American/Black communities. When asked why didn’t he approach Black churches before 2018 as a leader in the Gwinnett County Democratic Party, he responded “Community outreach was not my position. When I became president, this is what I did and look at my results.”

I just shook my head at Okoye. Because reaching out to the Black church was not part of his job description with the Gwinnett County Democratic Party, he never brought it up or acted upon that knowledge until he was president of the organization.

As an immigrant, Okoye demonstrates a cluelessness to the African-American/Black racist’ history and continued life in America. As he states, he is just thankful to be in America. While president of the Gwinnett County Democratic Party, Okoye always followed instructions from Rep. Donna McLeod who, by the way, does not want reparations for African-Americans in the United States. He is not a free thinker and very easily controlled.

Members of the Gwinnett Democratic Party encouraged Okoye to resign as president and run for Georgia State Senate District 9. Then they politely did not support him in the primary race after he said “I can raise the money to win the race.” Even his long-time friend and mentor Rep. Donna McLeod did not support him.

So when Okoye had his assistant call me to ask for my endorsement, I told her “Of course not” and to not call me again.

The worst is Nikki Merritt. Any time a large group of establishment (mostly white people) in Georgia back a Black candidate, you know that person is white-friendly and will bow down to white supremacy and racism. I met Merritt while campaigning in 2018. I incorporated two businesses for her and her husband. Merritt lacks ethics as her business tried to evade paying me for professional services provided in 2019. I had to dispute a claim the Merritts filed against my business with Paypal for hundreds of dollars. Not only did her business file the dispute on the very last day possible to do so, but I tried contacting her and her husband without a return call.

I won the Paypal dispute.

After the June 2020 primary, Merritt called me to ask for my support. But she nor her husband could give me a return call during the PayPal business dispute. Merritt asked me to call her back with my decision.

Merritt is still waiting for that call.

Is that how Merritt settles disagreements? Is that how she will move as a member of the Georgia Senate if elected?

Georgia Senate District 9 has been a Republican party stronghold for decades. After over 20 years of a questionable incumbent – Senator Don Balfour – who used the system to make over $100K a year in the position that only pays $17,342/year, P.K. Martin was elected to the seat. Martin is the ‘establishment yes-man’ and clearly has no regard for people of color in the district. In 2016, Martin ran unopposed.

In 2018, after fighting Cornerstone Coworking space in downtown Lawrenceville in court for being kicked out of their office space for holding a pro-Black event – “Come Meet A Black Person” — I looked at the landscape of racism in Gwinnett County and its politics. In a county that is the most diverse in Georgia with Blacks – African Americans – as the majority-minority – how could Gwinnett be politically ruled by all whites?

When I saw the incumbent of Georgia State Senate District 9 was running unopposed in 2018 — and nothing across his social media, website or presence showed diversity of any kind and his voting record was detrimental to diverse people of Gwinnett — I decided to run for the seat. I had no political experience, but I had critical-thinking,m expertise in activism and reaching people.

I became the first African-American, female candidate for the Georgia Senate District 9 seat in 2018.

With a grassroot, guerrilla marketing strategy and $1,200 in donations, I received 48.1% of the vote in the November 2018 General Election. Only 50% plus one vote would have been needed to win the race.

By the way, thank you to all of my supporters!

Let’s just think about the General Election November 2018. This is the same political race that we saw Stacey Abrams’ governorship stolen by then Georgia Secretary of State and now Governor Brian Kemp. This is the same race where 56,000+ absentee ballots in Gwinnett County were thrown out by Kemp. I lost my race by a little over 2,000 votes based on the reported totals. Some people asked whether I really lost my race in 2018, just as they asked the same about Stacey Abrams.

After the 2018 election, I continued my community activism, organizing and speaking truth to power which the establishment did/does not like. Here are some highlights.

I have never had being a politician on my bucket list. I am a problem-solver and accomplished in many industries. Unlike many politicians in Georgia, running and winning an office will definitely not be my biggest accomplishment in life.

In March 2020, I realized who was running for the Democratic nomination for Georgia State Senate District 9. I decided Gwinnett deserved better, and I qualified to run for the seat. I knew Merritt and Okoye were white-friendly and would not speak truth to power on behalf of the diverse constituency of the district. I believe both would continue the norm of ignoring the Black community in Gwinnett County, and pushing an agenda that would adversely affect the diverse constituency of the district.

I am not white-friendly. I speak truth to power and stand in solidarity with #BlackLivesMatter and the human race. I know that all lives can never matter if Black lives don’t matter. Being white-friendly will never solve racism – it only continues white supremacy.