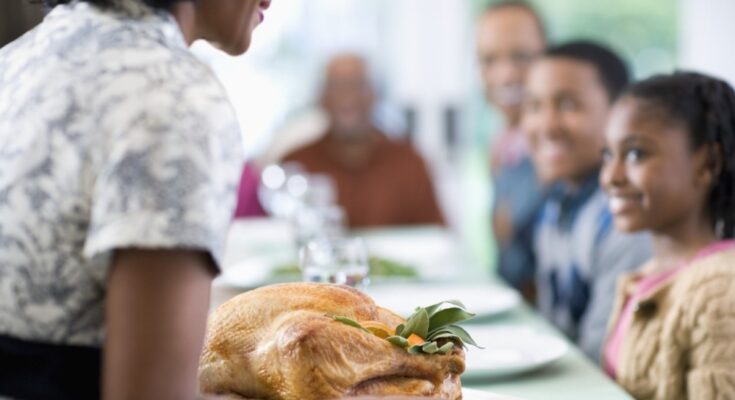 I remember the year I tried to boycott Thanksgiving. I was 19, entering that necessary but annoying phase of young self-righteous and half-informed quasi-pro-Blackness. I drove home anyway because students were essentially kicked out of dorms for the holiday. As soon as I hit the door, the aroma of greens, fatback and yams hit me in the face like a Tyson hook. My grandmother (whom I had tipped off about my plan on the phone earlier) turned to me while stirring the greens slyly.

Let’s get this out of the way: To celebrate Thanksgiving requires a bit of contortion from those of us who try to be socially conscious. The image of Pilgrims eating peacefully with American Indians at a shared harvest feast presents a faulty view of the founding of this country—one typically framed as though there was a willing handoff between Native and White. This obscures the history of violence and oppression, and it also manages to both legitimize and whitewash our country’s terrible actions toward its indigenous people. As a Black American who works every day to hold our country accountable for its rampant racial inequality that is a continuum of centuries of racism, terrorism, and genocide, Thanksgiving is truly a tough holiday to process.

The love that Black people have for the Thanksgiving holiday would seem to fly in the face of our shared history with American Indians, which is defined greatly by oppression at the hands of the White majority. The holiday’s special place in the Black familial and religious tradition, however, is full of the same contradictions of pain and joy, stark awareness and carefree celebration as are all our traditions.

For Black folks, celebrating Thanksgiving appears to be no less troublesome than celebrating many other American holidays. Independence Day celebrates White men establishing their independence from tyranny—while they passed down worse tyranny to others. Even religious holidays at the center of Black American culture carry the complex history of both salvation and enslavement.

The fact that we celebrate and participate in so many traditions that are so fraught with contradictions is a central part of our complex American story. We have always found ways to subvert the tools of supremacy and infuse them with our spirit while being forced participants in it. Slave food became soul food; spirituals born of pain and struggle became jazz, gospel and blues. Religious holidays became reasons to escape from the hardships of slavery, then from sharecropping and Jim Crow. They were opportunities to fill up on those soul foods, to revive the spirit in gospel and blues, to reunite families flung far first by slave trades and again by the Great Migration, to rebel with joy. As the central harvest celebration in the United States, Thanksgiving has embodied these things the most.

The entirety of Black American history has been a play on the razor-sharp line between subversion and submission. It is my view that our embrace of  Thanksgiving falls within the former. But it can only continue as such if participants are willing to consider the intersectionality of plights among Black people, Native American people and all people of color. Perhaps, then we’ll realize that there is a shared history of holiday ambivalence and complicated feelings about many of the institutions and rituals that we know as “American.”

But until then, the secret ingredient in them greens? That’s rebellion. Tastes good, right?

Picture this: As two newlyweds settle into their first home, the wife prepares a pot roast. Before she cooks it, she cuts off the tail end. Her husband asks, “Why’d you do that?” “That’s how it’s done,” she replies. “Does it make it cook faster or get juicier? Who taught you that?” he presses. “My mom has always done it that way,” she answers.

So she calls her mother.

For the sake of tradition, our people tend to have firm ways of thinking passed down for generations that have gone unchallenged—some of which are rooted in falsehoods. Thus, I have the same debate with my family each November. I ask them, “How can we honor a day that celebrates the White man’s Manifest Destiny, a legacy of slavery, land robbery, culture wrecking and the outright extermination of both wild beasts and tame men?” They say, “We know this country’s history, but Thanksgiving’s about family.” I say, “If that’s so, why not have our own day rather than adhere to someone else’s?”

“Shut up, boy, and pass the sweet potato pie!”

Don’t get me wrong: I have fond childhood memories of auntie-filled kitchens spreading wonderful smells throughout the house (until that one relative brought over a stinky pot of chitlins) and football blasting on the TV (usually the Washington team that will not be named). But as I grew older, the hypocrisy of giving thanks as part of a celebration based on genocide was even funkier than those pig intestines.

For me, Thanksgiving is reminiscent of a favorite slave meal: pig’s feet, ears and tails—others’ scraps we had to make do with. I can’t reconcile coming together over the same soul food that killed Big Mama to dismiss the struggles of our Native brothers and sisters. Thanksgiving itself is not about kin but about domination and exploitation, so why not instead establish our own cultural traditions like we did with Kwanzaa? Why not have a Harvest Day on Black Friday (since that seems to be the only time the term “Black” is used positively in the English language)? There are 365 days in a year. You can get your Black family together some other time, I promise.