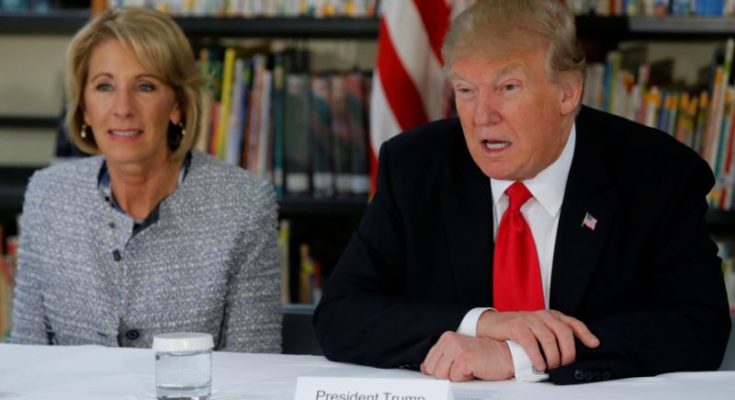 Congressman To Trump: Betsy DeVos is “Rich, White, and Dumber Than a Bag of Hammers”  […]

The public displays of acrimony between California lawmakers and President Donald Trump’s administration continued on Sunday, with Representative Jared Huffman labeling Education Secretary Betsy DeVos as “rich, white, and dumber than a bag of hammers.”

Huffman, who represents Northern California, tweeted the insult from his personal account and directed it at Trump.

“Dear President Trump, if you want to meet someone who has an actual IQ problem (as opposed to just being black), meet your Education Secretary Betsy DeVos,” Huffman tweeted. “Rich, white, and dumber than a bag of hammers.”

The tweet linked to a viral clip of DeVos’ much-pilloried Sunday interview on “60 Minutes.” In the segment, DeVos, a devout believer in charter schools, struggles to answer questions about the quality of public education in her home state of Michigan.

In the tense exchange, correspondent Lesley Stahl questioned whether it’s wise to remove funds from public schools and inject them into charter schools, as DeVos had a hand in doing in Michigan. DeVos avoided answering the critique directly and pivoted by saying she “avoids talking about all schools in general, because schools are made up of individual students attending them.”

Since 1993, Michigan has been home to the lowest test score gains in the nation, according to the National Assessment of Education Progress.

Huffman, whose tweet did not circulate widely on Twitter, earned a few detractors who disagreed with his language. Neither the Congressman nor the Department of Education could be reached for comment.

“I’m a constituent who supports you, but I don’t think calling anyone “dumber than a bag of hammers” is productive or becoming of a Congressman, no matter what,” wrote Kirsten Gardner. “Please remember what Michelle Obama said about when they go low.”

This is a reprint. Click here to view original web page at www.yahoo.com