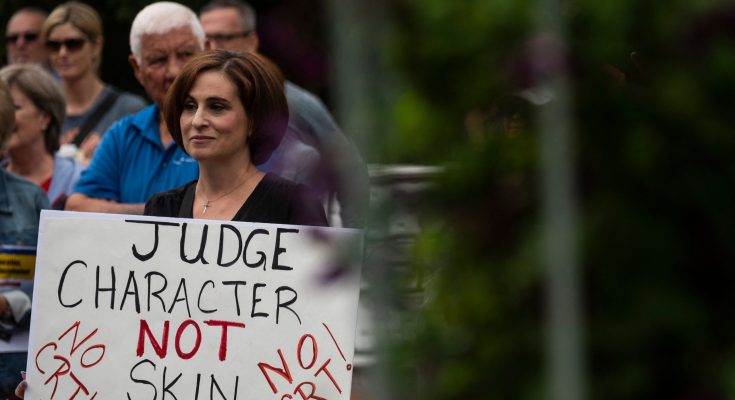 If Black History Month is a moment to recognize how far we’ve come, it’s also an opportunity to acknowledge how far we still have to go. This month, Republican lawmakers will tweet inspirational quotes in honor of Black civil rights icons, but ban literature and resources that tell the stories of our history. And leaders from all ends of the political spectrum will issue statements and engage in “acts of solidarity” while failing to use their power to dismantle the systems that continue oppressing Black people. We don’t need your words or symbolic camaraderie, we need action.

One of the most pivotal pieces of legislation to come from the Civil Rights Movement was the Voting Rights Act of 1965. Facing violence and suppression at the hands of the state, Black voters marched from Selma to Montgomery, asking to be heard. Later that year, the Voting Rights Act passed, empowering Black voters by eliminating the racist hurdles that states had put in place to disenfranchise them. Since then, it’s been gutted by the Supreme Court and corrupt and racist lawmakers have enacted voter suppression bills all across the country. So, here we are, almost 60 years since its passing, imploring our leaders to pass voting rights legislation once again. Congressional Democrats have attempted to do so, but Senate Republicans, unsurprisingly, have blocked it by using that notoriously racist American relic: the filibuster. This is why progressives have been vocal about the need for the Democratic Party to eliminate this procedure that, throughout history, has blocked anti-lynching legislation, anti-poll tax legislation, a national popular vote amendment, the Civil Rights Act of 1966, and various other pro-civil rights legislation. The midterm elections are fast approaching and nothing has been done to protect or expand the franchise. In a true democracy, your vote is your voice. So the continued dismantling of voting rights — a process that is designed to negatively impact Black voters — is stripping us of our voices.

When it was recently announced that Maya Angelou would become the first Black woman to be featured on the quarter, I couldn’t help but think of the many ways lawmakers could truly honor the lives and legacies of Black women, past and present. One significant move would be to cancel student loan debt, which Black women hold more of on average than any other group. Student loan debt is an additional barrier that is working to maintain the racial wealth gap. As a result of slavery, segregation, and the systemic racism that has shaped the U.S. and its institutions, Black students are less likely to be beneficiaries of generational wealth. So it’s no surprise that Black students borrow more via student loans. According to a 2019 report from Brandeis University’s Institute on Assets and Social Policy, “Twenty years after starting college, the median debt of white student borrowers has been reduced by 94 percent — with almost half holding no student debt — whereas Black borrowers at the median still owe 95 percent of their cumulative borrowing total.” Additionally, NPR reported that about 80% of Black millennials with at least a bachelor’s degree still have student loan debt, compared to only half of white millennials.

“The student debt crisis is a racial and economic justice issue and we must finally begin to address it as such,” Rep. Ayanna Pressley (D-MA) has said. “Broad-based student debt cancellation is precisely the kind of bold, high-impact policy that the broad and diverse coalition that elected Joe Biden and Kamala Harris expect them to deliver.” The Congressional Progressive Caucus (CPC) has been pushing the Biden administration to cancel at least $50,000 in student debt per borrower and, while on the campaign trail, Biden committed to canceling $10,000 per borrower. None of this has happened and, for the record, $10,000 is not enough — especially for descendants of enslaved Black people, who have never received the reparations that are owed to them. Representation is important, but it’s not enough. Honoring our history is important, but it’s not enough.

WATCHAmandla Stenberg on Why Black is Beautiful and Powerful

In the wake of 2020’s global uprisings for Black lives, what tangible changes have we seen? Beyond the inaction on securing our voting rights and on taking steps that can financially empower generations of Black people, we are being incarcerated at disproportionate rates by a justice system that is shaped by racism. Black Lives Matter protesters are still facing felony charges from their involvement in the protests. We are still being killed for simply existing. In February, 22-year-old Amir Locke was killed after Minneapolis police entered an apartment without knocking. Legislation could have reduced the likelihood of Locke’s death, yet in the aftermath, Minneapolis Mayor Jacob Frey is only temporarily banning no-knock warrants in certain situations. Our country is repeating the parts of U.S. history that we should have learned from — the parts that our leaders claim to be so far removed from, especially when February arrives.

This month, our lawmakers will praise the strength and impact of our Black history-makers while disregarding the fact that they are walking among the Black history-makers of tomorrow. These legislators are the leaders who will be in future history books, as the people who held up progress — as the leaders who refused to create a better nation for Black people and for everyone else too.

During our last election, Black voters came out in record numbers and delivered by putting Democrats in power. This is the time for change. If Democrats aren’t going to take tangible action, nothing will change. We’ll keep reliving the same sad history. And come next election, Black voters might not choose to “save” our democracy. To truly honor and uplift this month, you have to honor and uplift the people — Black people. We are the descendants of the Black history-makers who risked their lives for the “soul of this country.” To look us in the eyes and claim to honor our history while dismissing our present is insulting, irresponsible, and in line with the many embarrassing contradictions that plague our country’s history.