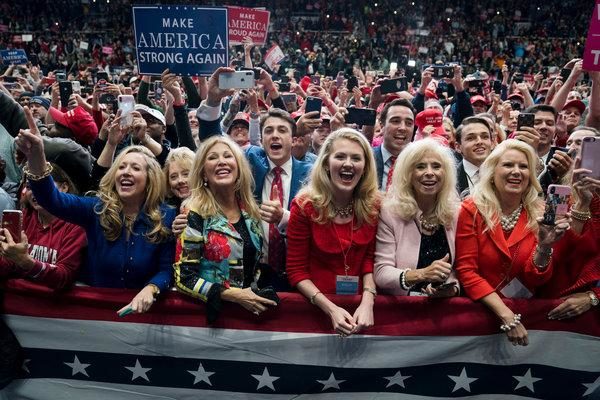 Once again, majority of white women – 59% – voted for Republicans during the mid-term elections 2018. As Jemele Hill asked, “So given then numers, who is the real face of feminism?”

There needs to be accountability and an honest reckoning. There’s a lot of work to do, white women. A lot of learning. A lot of growing.

We want to do it with you.
Stay tuned. https://t.co/nN0cFqqmy5

‘The US midterms result showed the power of the female vote – but why are so many white women still supporting Republicans?’ – @LuciaOC_ blogs https://t.co/9mV6Y2EhTL

It is also white women who are calling the police on blacks from around the diaspora in the United States? Our question is why? Julie Hirschfeld Davis and Katie Rogers writes an article for The New York Times address that question.

At Trump Rallies, Women See a Hero Protecting a Way of Life

COLUMBIA, Mo. — Standing in an airplane hangar in the mid-autumn chill awaiting the arrival of President Trump, Joan Philpott said she was angry and scared. Only Mr. Trump, she said, can solve the problems she worries most about.

Ms. Philpott was one of thousands of women who braved a drizzle for hours to have the chance to cheer Mr. Trump at a rally here on Thursday. While political strategists and public opinion experts agree that Mr. Trump’s greatest electoral weakness is among female voters, here in Columbia and places like it, the president enjoys a herolike status among women who say he is fighting to preserve a way of life threatened by an increasingly liberal Democratic Party.

“He understands why we’re angry,” Ms. Philpott said, “and he wants to fix it.”

As Republican candidates battle to keep their congressional majorities in the midterm elections on Tuesday, Mr. Trump is crisscrossing the country to deliver a closing argument meant to acknowledge — and in many cases stoke — women’s anxieties. At rally after rally, he has said that women “want security,” warning of encroaching immigrants, rising crime and a looming economic downturn if Democrats gain power.

Some of Mr. Trump’s female backers initially supported him only reluctantly or do so now in spite of reservations about his bawdy language and erratic behavior. But they shared in his victory after the bitter and partisan battle over the confirmation of Justice Brett M. Kavanaugh. And many believe the president when he reminds them during each of his hourlong pep rallies that the world they know — largely Christian, conservative and white — is at stake on Tuesday.