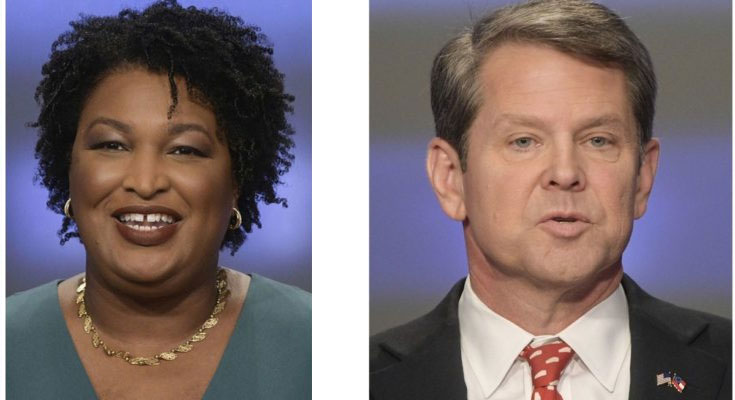 On Tuesday, July 24, 2018, voters went to the poll to elect runoff candidates and the Republicans top of the ticket nominees. Current Georgia Secretary of State Brian Kemp beat the socks off Lt. Governor Casey Cagle. Now the November ballot is set. We have Democratic Stacey Abrams against Republican Brian Kemp.

P.S. LA Times, I see you! I see that you extended the photo of Stacey Abrams to make her face look wider. Since you don’t seem to have staff who can do that for you, here is a corrected photo you can use.

It is shaping up to be the ultimate identity-politics contest: A brash, shotgun-wielding, white male conservative who bills himself as “politically incorrect” will compete in Georgia’s gubernatorial race with a liberal Ivy League Democrat who hopes to be the nation’s first black female governor.

After celebrating his landslide win Tuesday night in Georgia’s Republican primary for governor, Brian Kemp was quick to pivot to the November general election, painting his Democratic rival, Stacey Abrams, as a radical funded by coastal elites.

Indeed, Republicans have long ruled this Southern state, and almost two decades have passed since a Democratic was elected governor. But Democrats are pouring millions of dollars into the November race in the hope that a rapidly growing and diversifying population, along with dissatisfaction with President Trump, could make it a swing state.

Trump won Georgia by 5% in 2016, but political observers note that his divisive and erratic governing style has energized the Democratic base and turned off many independents and moderate conservatives in Atlanta’s sprawling suburbs — setting the stage for a gubernatorial race that could be more competitive than usual and more focused on national issues.

“It’s going to be a little bit like a laboratory,” said Kerwin Swint, a political science professor at Kennesaw State University near Atlanta, noting that neither of the candidates is a moderate, and therefore they will have to find a way to energize supporters without turning off swing voters. “It’s going to be a battle of the bases.”

Abrams, 44, a Yale law school graduate and former Democratic leader of Georgia’s House of Representatives, won 76% of Democratic votes. But her history of liberal positions such as supporting the Affordable Care Act and purging the state of all civil war monuments could alienate independents.

Kemp, 54, Georgia’s secretary of state, secured 69% of the Republican vote. But his brash, Trump-like style could hurt his ability to attract swing voters.

Early on, Kemp won national attention for his brazen campaign ads. One showed him flaunting a double-barrel shotgun at a young man interested in dating his daughter. In another, he bragged that he drove a big pickup truck just in case he needed to “round up criminal illegals” and “take them home myself.”

He was once considered a longshot against Casey Cagle, the lieutenant governor who spent years trying to shore up support for his campaign. Cagle doubled Kemp in fundraising and beat him by 13% in May’s Republican primary.

But as the two faced off in the runoff, Cagle’s campaign gradually lost momentum after opponents released a secretly recorded conversation in which he admitted he had supported what he considered a “poor public policy” measure to block a different rival’s fundraising efforts. He also griped about the Republican primary runoff, saying it had boiled down to “who had the biggest gun, who had the biggest truck, and who could be the craziest.”

As Cagle’s margin of victory appeared to crumble, President Trump stepped into the race last week and announced his “full and total” endorsement of Kemp.

Trump went on Twitter on Wednesday to congratulate Kemp on his “big numbers” and offer him a few pointers: “Now go win against the open border, crime loving opponent that the Democrats have given you. She is weak on Vets, the Military and the 2nd amendment. Win!”

Abrams, who was born in Mississippi but moved to Atlanta when she was in high school, is a tax attorney who was elected to Georgia’s House of Representatives in 2006 and became minority leader in 2010. During the course of her gubernatorial campaign, she has taken a different tack from previous Democratic candidates, focusing on minorities and young voters who often don’t show up at the polls.

To counter Republican criticism that she is a radical, Democrats tout her history of compromise as a state representative. In 2011, Abrams worked with Republicans to raise the GPA requirement for the state’s HOPE scholarship program — a deal her campaign said aimed to protect the scholarship from massive cuts.

“Even with this stark dichotomy between Kemp and Abrams in their styles and in their politics, people forget that Stacey has a giant amount of substance and a long record of working across the aisle, of getting things done,” said Jason Carter, a lawyer, former gubernatorial candidate and grandson of President Carter, a former Georgia governor.

This is not the first time Democrats have pinned their hopes on Georgia voters delivering a stinging rebuke to Trump. Last year, the party invested tens of millions of dollars in the much-hyped campaign to back political newcomer Jon Ossoff against Republican Karen Handel in Georgia’s 6th Congressional District. It was the most expensive House race in history, but Ossoff wound up losing with 48% of the vote.