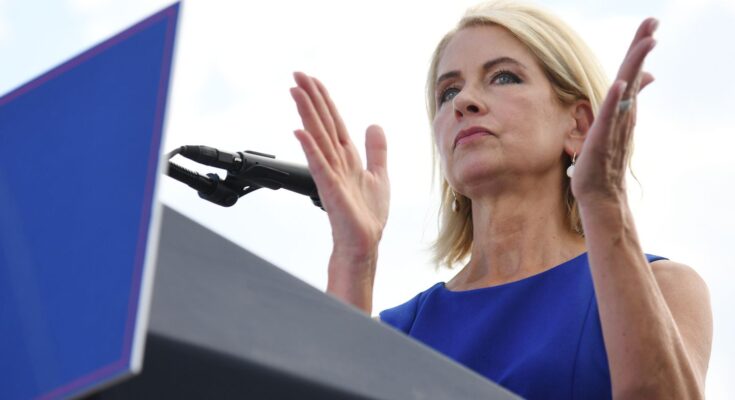 Lurking within the 50-year-battle against abortion is the odious belief that reproductive rights facilitate ‘white replacement.’

“President Trump, on behalf of all the MAGA patriots in America, I want to thank you for the historic victory for white life in the Supreme Court yesterday,” she said last week at a Donald Trump rally in her home state one day after Roe v. Wade was overturned.

This was no needle scratch. The overwhelmingly white audience didn’t gasp when Miller hailed “victory for white life.” They cheered. Miller didn’t correct herself as if she’d made an unfortunate gaffe; instead, she clapped and smiled at the smirking former president who stood with herin front of a sea of “Save America” signs.

Isaiah Wartman, Miller’s spokesman, later tried to clean up what became a trending social media mess by claiming it was just “a mix-up of words” and that Miller meant to say “right to life” in prepared comments. I’m surprised that Wartman even bothered to offer any explanation. Miller said what she meant and meant what she said. When conservatives and far-right extremists talk about “saving the unborn,” what they also mean is saving white supremacy.

Months before Mitt Romney, then the Republican presidential nominee, lost to President Obama in 2012, Senator Lindsey Graham of South Carolina lamented what this nation’s changing population would mean for his party’s political future. “The demographics race we’re losing badly,” he told The Washington Post. “We’re not generating enough angry white guys to stay in business for the long term.”

Graham didn’t mention so-called replacement theory, but it was lurking within his concerns about what America’s shifting racial and ethnic lines would mean for white power. More than a century old and fueled by white grievance, it’s the odious theory that there’s a nefarious scheme to replace white people with Black people, Jews, and immigrants. Long before white supremacy’s drum major, Tucker Carlson, made this mendacious belief a relentless talking point on his Fox News show, white people have harbored fears of loss of status to those they falsely deem as unworthy.

After the Chinese Exclusion Act of 1882, which banned most Chinese immigrants from entering this nation, many who already worked as miners in America were subjected to intimidation and violence. Fearful that they would be replaced by Chinese people who worked for lower wages (not by choice, but due to racism), white miners sparked massacres that killed an unknown number of Chinese people and left their communities in ruins.

White fears of replacement have never been as fringe as some portray them. Now they represent mainstream Republican politics. Miller was not admonished by her party’s leadership, which I don’t believe is all that outraged by the extremism consuming their ranks. Nor did she apologize for the kind of rhetoric that could have been plucked from the white supremacist manifestos found after racist and antisemitic massacres in Charleston, S.C., El Paso, and Pittsburgh.

Last month, a white supremacist reportedly drove hundreds of miles to a predominantly Black neighborhood and killed 10 Black people in a Buffalo supermarket. In online comments, he claimed he wanted “to prevent Black people from replacing white people and eliminating the white race,” according to FBI officials.

Days after the massacre, Matt Schlapp, who heads the Conservative Political Action Conference, spoke about what he called “a solution” to white replacement.

“If you say there is a population problem in a country but you’re killing millions of your own people through legalized abortion every year. If that were to be reduced, some of that problem is solved,” he said. “You have millions of people who can take many of these jobs. How come no one brings that up? If you’re worried about this quote-unquote replacement, why don’t we start there? Start with allowing our own people to live.”

RELATED: Here’s what Trump’s Supreme Court picks said about overturning Roe v. Wade as a precedent during their confirmation hearings

Schlapp left the white part silent, but his meaning was clear. So was Miller’s — reproductive freedom abets white replacement, making its abolition a “victory for white lives.” They couldn’t care less about how upending Roe’s demise has already been — the disproportionate impact it will have on women of color, those who want to have a baby through in vitro fertilization, or those who suffer pregnancy complications.

Nearly half of Republicans believe at least in part that white people are being intentionally replaced by immigrants. Call it white nationalism, white evangelical Christian theocracy, or plain old white supremacy. But whatever you call it, call it out in no uncertain terms.

It’s not just Republicans like Miller and Schlapp. What the Supreme Court’s conservatives did by unsettling what was once thought to be settled law is an insurrection being realized in each devastating decision — and they’re just getting started. Forget saying the quiet part out loud. As Miller proved, racist extremism doesn’t even pretend to have a quiet part anymore.

Renée Graham is a Globe columnist. She can be reached at renee.graham@globe.com. Follow her on Twitter @reneeygraham.