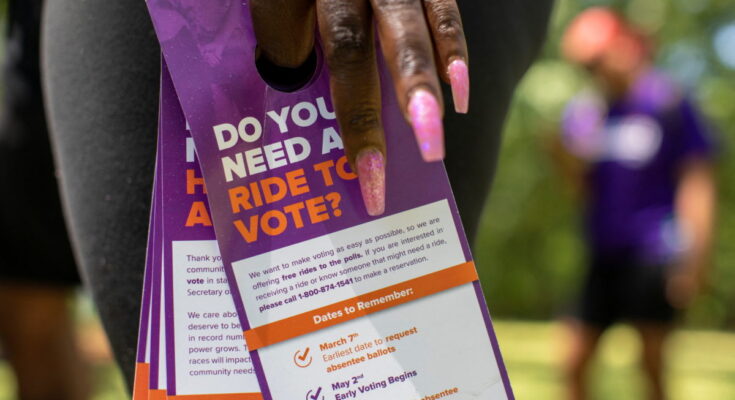 ATLANTA (AP) — Georgia takes center stage in Tuesday’s primary elections as Gov. Brian Kemp and Secretary of State Brad Raffensperger try to fight back challengers endorsed by former President Donald Trump, who is seeking revenge for his 2020 election defeat in the state.

U.S. Rep. Marjorie Taylor Greene of Georgia is testing Republican voters’ tolerance for controversy in her primary. On the Democratic side, U.S. Rep. Lucy McBath and U.S. Rep. Carolyn Bourdeaux are facing off after McBath switched districts because of redistricting.

Trump’s desire for vengeance has fueled the primary challenges to Kemp and Raffensperger, both of whom defied his pressure to overturn Georgia’s 2020 presidential election results.

Trump recruited former U.S. Sen. David Perdue to take on Kemp for the Republican gubernatorial nomination, but Perdue has lagged in polls and fundraising. Kemp has been increasingly confident the GOP will send him forward to a November rematch with Stacey Abrams, who is unopposed for the Democratic nomination.

Raffensperger, the state’s top elections official, is facing a tough challenge from U.S. Rep. Jody Hice, who has promoted Trump’s lies that widespread voter fraud or tampering cost him the 2020 election.

Trump’s candidate for U.S. Senate, football legend Herschel Walker, appears to be cruising to the Republican nomination despite some GOP leaders warning that Walker will be unelectable in November against Democratic incumbent Raphael Warnock. Walker has been accused of threatening his ex-wife’s life, exaggerating his business record and lying about graduating from the University of Georgia.

Greene, a political lightning rod, is trying to stave off multiple Republican challengers. The Trump-backed firebrand was stripped of her committee assignments last year over racist remarks, her embrace of conspiracy theories and a past endorsement of violence. A group of voters tried but failed to knock her off the ballot, accusing her of helping foment the Jan. 6 insurrection at the U.S. Capitol.

In the Atlanta area, an unfavorable new district led Rep. McBath to jump into a Democratic primary against fellow Rep. Bourdeaux. McBath said her push to stay in Congress was about fighting for gun safety on behalf of her son Jordan, who was killed in a shooting 10 years ago.