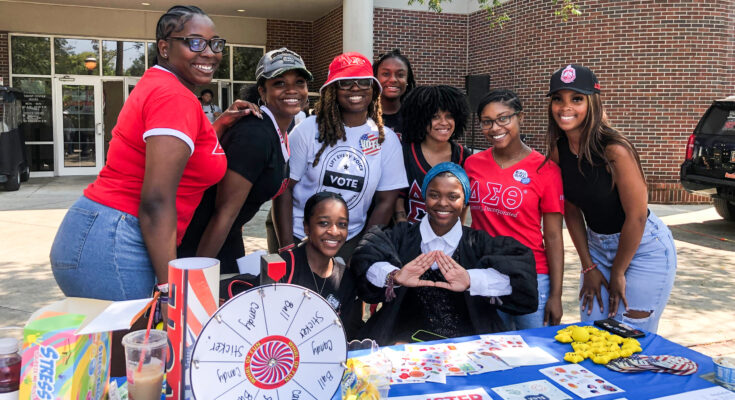 By Char Adams for NBC News

Clark Atlanta University Votes collaborated with fraternities and sororities on campus to host a voter registration dirve on September 20th, National Voter Registration Day. Black students are credited with being one of the forces behind turning Georgia into a swing state. Now Black students are looking forward to getting young voters registered and engaged for 2022.

According to NBC News, Georgia has become a competitive battleground state in the midterm elections, with voters set to decide between Democratic Sen. Raphael Warnock and Republican Herschel Walker for senator and Democratic Stacey Abrams and Republican Gov. Brian Kemp for governor.

Youth voter turnout has been increasing across the country since 2016, according to Vlad Medenica, associate director for GenForward, a national survey that prioritizes young voters. He said mobilization was a key factor in Georgia’s groundbreaking youth voter turnout in 2020. Now, he added, “that’s the big question mark this year, whether or not the political parties can really speak to these voters and motivate them to cast a ballot.”

When it comes to young voters, Medenica said, the issues they’re most concerned with are the same ones plaguing society more largely.

“In our most recent survey, inflation was the issue that was flagged as most important to young adults, including young Black adults,” Medenica explained. “Inflation is something that has been impacting all of us, especially younger people as they’re dealing with higher prices at the grocery store, at the gas pump, and paying rent as well. Young voters in general are pretty sophisticated. They’re thinking about the things that impact their lives.”

Georgia is one of several states that implemented severe abortion restrictions after the Supreme Court overturned the landmark Roe v. Wade in June. A federal appeals court in July overturned a lower court ruling and allowed a restrictive abortion law that bans most abortions once a “detectable human heartbeat” is present to take effect in the state.

Although new polling shows Abrams struggling to close the gap with Kemp and Warnock leading in a tight race against Walker, 2021 may be an indicator of what the polls can expect from young Black voters. Young people in Georgia, ages 18 to 29, voted primarily for Democratic candidates in the 2021 Georgia Senate runoffs, voting 64% for Warnock, according to CIRCLE. More than 90% of young Black voters backed Democrats in that election.

Now, as organizers work to mobilize voters for the midterms, advocates say it’s important that Black students, like those at HBCUs, are seen as an important, necessary voter bloc, rather than a group to exploit for political gain.

“They’re very much active participants, full participants in the civic process,” said Dylan Sellers, manager of the Campus Vote Project’s HBCU Legacy Initiative. “It’s not just remembering that they exist when it comes time for voting, when you’re looking for a Black population. It’s treating them like full partners and seeing them as part of current society.”