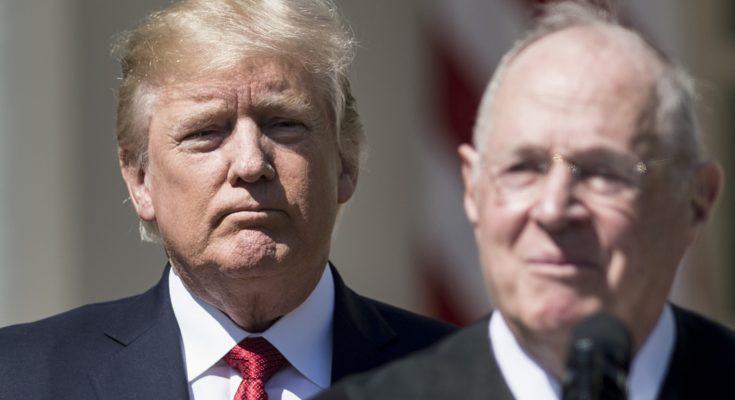 On Wednesday, Supreme Court Justice Anthony Kennedy announced his retirement and for many, this week could not get any worst. Why now? That’s the question most of us are asking. Heron Greenesmith June 28, 2018, article for Huffington Post sums the situation up perfectly below as reposted on Yahoo News.

Justice Anthony Kennedy’s retirement announcement on Wednesday secured his legacy. By declaring his intention to leave the court on the same day he joined an opinion by Chief Justice John Roberts gutting labor rights, and the day after he joined opinions upholding President Donald Trump’s Muslim ban and California’s protections against fraudulent crisis pregnancy centers, Kennedy has ensured that he will be remembered not for the landmark pro-LGBTQ cases he authored, but for upholding the racist, misogynist, anti-labor principles that run rampant throughout the Trump administration.

A Ronald Reagan appointee who joined the country’s highest court in 1988, Kennedy has a mixed record at best. Attorneys arguing before the court frequently talked of “speaking to Kennedy,” as he was often the only justice whose vote could not be reliably predicted from past opinions.

Yet on same-sex marriage, Kennedy became a rock for the LGBTQ community. He wrote the opinion in 1996’s Romer v. Evans, striking down a Colorado law banning local LGBTQ nondiscrimination ordinances. In 2003, he authored the seminal decision in Lawrence v. Texas, heralding the end of state criminalization of same-sex relationships. He then wrote the landmark decisions in U.S. v. Windsor, which brought federal recognition to people married in states that had already expanded marriage to same-sex couples, and Obergefell v. Hodges, expanding marriage equality to the entire country.

Kennedy’s record on LGBTQ rights, however, is narrowly limited to the unique issue of relationship recognition. The LGBTQ community is diverse, and Kennedy’s record on other important civil rights issues undermines this seemingly solid support for queers.

His record on abortion is mixed: In 2007, he wrote the opinion upholding a federal ban on some forms of abortion. He’s struck down gun control laws, supported strip searches for people in detention, declared that corporations are people for the purposes of campaign contributions, and joined the majority in Burwell v. Hobby Lobby, the case holding that for-profit corporations can claim religious exemptions.

At the beginning of June, Kennedy joined six other justices who all agreed that, while states can certainly protect LGBTQ people from discrimination in places of public accommodation, the Colorado Civil Rights Commission acted too acrimoniously against the baker who declined to serve Charlie Craig and Dave Mullins.

This week ― the last week of his long career on the court ― Kennedy cemented his reputation for the history books, not as a moderate swing vote who could be counted on to support LGBTQ rights (to a point), but as a hard-right, anti-Muslim, anti-immigrant, anti-health care, anti-worker conservative. On Tuesday, Kennedy joined the court’s conservative justices in upholding Trump’s ban on travelers from several Muslim-majority countries entering the U.S. The staggering opinion flew in the face of the enormous deference the court seemed to require of the Colorado cake baker’s religious beliefs. Kennedy also signed Justice Clarence Thomas’ opinionstriking down California’s requirement that crisis pregnancy centers (anti-abortion advocacy organizations that masquerade as health clinics) identify themselves and tell patients they don’t provide comprehensive health care, including abortion care.

These three cases represent three pillars of Trump’s administration: disdain for immigrants and Muslim people; disdain for health care, particularly for women and low-income people; and disdain for labor organizing and the working class.

By retiring now, at the end of the spring 2018 term, Kennedy has made a clear and indisputable statement: He wants Trump to be able to appoint his successor, and he wants the closely divided Senate to confirm that candidate before the November midterms. That body has confirmed nearly every single administrative and judicial nominee the president has sent them ― no matter how repugnant the candidate’s values or lacking their experience ― and there’s no reason to think the outcome will be different now.

I would say good riddance to Kennedy, but I fully expect his replacement to be even worse, another ultra-conservative in the mold of Justice Neil Gorsuch.

And that’s what we’ll remember him for.

Heron Greenesmith is a policy attorney for LGBTQ people, specializing in advocacy for bisexual and pansexual communities. Greenesmith is a board member of the Massachusetts LGBTQ Bar Association.