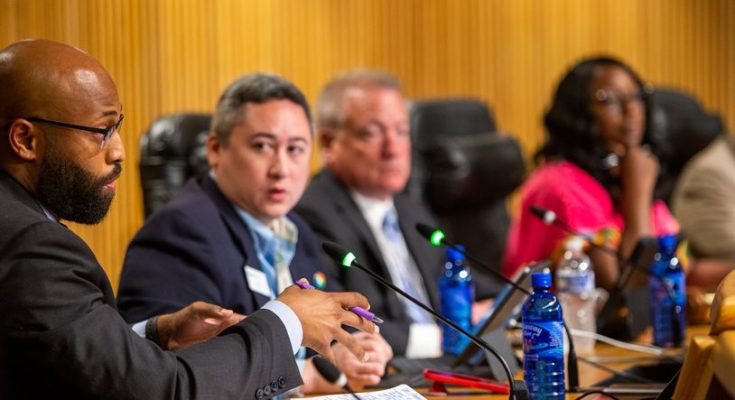 The Republicans of Gwinnett County are attempting to change the political game in a now Democratic-run county commission. Here is a reprint of an article written by Greg Bluestein and Tyler Wilkins for The Atlanta Journal-Constitution that details this new political saga of the Gwinnett County.

Last November, Democrats took control of the Gwinnett County commission for the first time in nearly three decades. This November, the county’s lone GOP state senator is engineering a sudden effort to neutralize some of those Democratic gains.

In a stealth move this week, state Sen. Clint Dixon orchestrated an attempt to nearly double the number of commission seats, neuter the power of the county’s newly elected chairwoman and make the school board, which also flipped to Democrats, nonpartisan.

The reason for this late push, according to Dixon, is the pressing desire to give Gwinnett residents more representation in the most diverse county in the state. There was no such desire last year when Republicans controlled the commission.

Since then, an epic election cycle for Democrats flipped the balance of power decisively in Gwinnett, the second most populous county in the state with roughly a million residents. Democrats now command the county school board, hold every seat on the county commission and lead the sheriff’s department, the District Attorney’s office and several other elected positions.

The makeup of the new Democratic political class in Gwinnett is just as notable. Many of the Democratic winners are decades younger than the elected officials they replaced. And every one of them is Black.

The overhaul, which would add five commission seats, would still favor Democrats with a 7-2 split. But it would create three plurality white districts in an overwhelmingly nonwhite county. State Rep. Gregg Kennard, a Lawrenceville Democrat, calls it “whitelash” targeting Black residents in Gwinnett.

“These white Republicans had no issue with the configuration of our county government as long as it was white and Republican,” said Kennard. “And until 2018, for 200 years, it was exclusively white.”

Another issue is that Gwinnett Democrats say they were blindsided by the GOP-led push, which is relying on a judicious interpretation of what Gov. Brian Kemp’s proclamation allows during a special legislative session designed to redraw the political maps.

“Black people running the Board of Education and Board of Commissioners does not constitute an emergency just because certain people don’t like it,” said state Rep. Jasmine Clark, a Lilburn Democrat, on Wednesday.

Dixon has admitted he didn’t converse with county officials about the legislation he introduced and declined to comment on whether he regretted his approach.

Among those caught unaware was Gwinnett Commissioner Kirkland Carden, who said he found out about the changes from a friend of his aide who saw a legal notice in a Gwinnett publication. When he started texting and calling Republican lawmakers earlier this week, none replied.

It wasn’t until Tuesday morning when he finally got Dixon on the line. Dixon agreed during the call that expanding the commission would make it more difficult to meet quorum. Carden also criticized Dixon for keeping him and other officials in the dark during the conversation, which was recorded and shared with the AJC.

Reached late Thursday, Dixon said it was “shocking” that the commissioner recorded the phone call. And he’s vowed to push ahead with his measures despite the pushback.

Carden, for his part, doesn’t mind that he stunned the Republican by taping the call. He wants state lawmakers to give the commission the chance to draw its own lines.

“We all feel betrayed. We all feel surprised,” Carden said. “You can’t say this is in the best interest of Gwinnett County if you don’t even reach out to the county administrators and leaders. It shows you don’t respect the voters that put us in this position. It’s a naked partisan power grab.”

The bills would disenfranchise the nearly 1 million residents within Gwinnett, said Nicole Love Hendrickson, the county’s first Black chairwoman, on Thursday. She said it’d create inefficiencies in local government and place a financial burden on taxpayers.

”You cannot make a decision based on a small district that you represent in Gwinnett County and say that that is reflective of the entire community,” Hendrickson added. “It’s just not.”