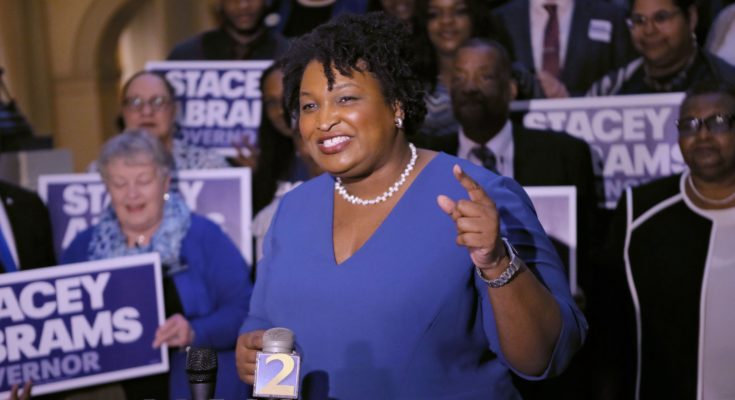 On Tuesday, May 22, 2018, Stacey Abrams made history winning the Democratic nomination for governor of Georgia making her the first black woman to be a major party nominee for governor in the United States. The country is watching Georgia. Will Democratics be able to turn Georgia blue in November?

Read the New York Times article by Jonathan Martin and Alexander Burns on Abrams win below.

Georgia Democrats selected the first black woman to be a major party nominee for governor in the United States on Tuesday, choosing Stacey Abrams, a liberal former State House leader, who will test just how much the state’s traditionally conservative politics are shifting. By handily defeating Stacey Evans, also […]

Georgia Democrats selected the first black woman to be a major party nominee for governor in the United States on Tuesday, choosing Stacey Abrams, a liberal former State House leader, who will test just how much the state’s traditionally conservative politics are shifting.

By handily defeating Stacey Evans, also a former state legislator, Ms. Abrams also became Georgia’s first black nominee for governor, a prize that has eluded earlier generations of African-American candidates in the state. The general election is sure to draw intense national attention as Georgia voters determine whether a black woman can win in the Deep South, a region that has not had an African-American governor since Reconstruction.

She will face either Lt. Gov. Casey Cagle, the top Republican vote getter Tuesday, or Secretary of State Brian Kemp. Mr. Cagle and Mr. Kemp will vie for their party’s nomination in a July runoff.

Ms. Abrams’s victory, confirmed by The Associated Press, came on the latest 2018 primary night to see Democratic women finding success, as voters in Kentucky, Arkansas and Texas also went to the polls. Among the winners was Amy McGrath, a former Marine fighter pilot, who upset Mayor Jim Gray of Lexington in a House primary in Kentucky.

But it was the breakthrough of Ms. Abrams that drew the most notice. A 44-year-old Yale Law School graduate who has mixed a municipal career in Atlanta and statehouse politics with running a small business and writing a series of romance novels under a nom de plume, she is now a central character in the midterm elections and the Democratic Party’s quest to define itself.

In a Facebook post declaring victory Tuesday night, Ms. Abrams, who won more than 75 percent of the vote, acknowledged the general election would be tough and cast herself as the candidate representing “the Georgia of tomorrow.”

Speaking later to a throng of supporters at a downtown Atlanta hotel, Ms. Abrams did not directly invoke her barrier-breaking nomination but held up her candidacy as a sign of the state’s progress.

“We are writing the next chapter of Georgia’s history, where no one is unseen, no one is unheard and no one is uninspired,” she said.

When she arrived, Ms. Abrams spoke forcefully, calling herself a “proud daughter of the Deep South,” and referring to Georgia’s rich but “complicated” history — and of leaders who too often had overlooked the “gap between struggle and success.”

She also quoted the Book of Esther, saying “We were born for such a time as this.”

With Atlanta thriving as a capital of black America and a magnet for immigrants across the world, Georgia’s demographics are changing. Yet even as Democrats eye the state as the next great blue hope, the party has struggled to win statewide office in part because it has had little success with conservative-leaning whites. African-American Democrats have held powerful state offices, like the attorney general’s post, but Republicans currently control every major position in Georgia.

Ms. Abrams has signaled that she is unlikely to spend much time pleading with rural whites to return to a Democratic Party that they have largely abandoned. She has embarked instead on a strategy of energizing a coalition of young and nonwhite Georgians who represent a growing share of the state’s population, an approach national Democrats are watching closely as they grapple with how to reclaim the presidency.