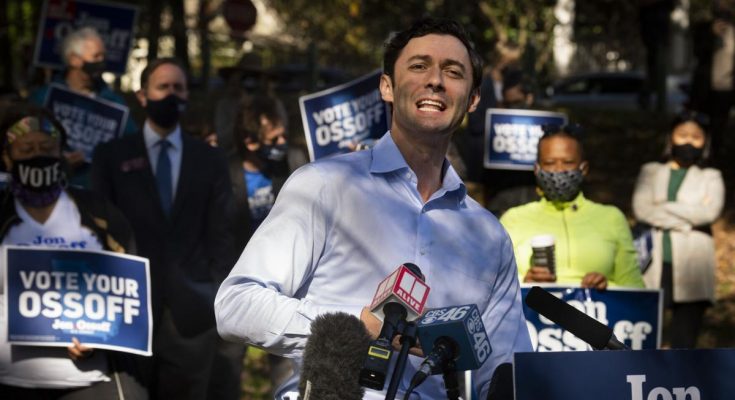 By Michelle Bocanegra for Politico

Republican Sen. David Perdue and Democratic challenger Jon Ossoff are heading to a January runoff in Georgia, after both fell short of a majority in the November vote.

Republican Sen. David Perdue and Democratic challenger Jon Ossoff are heading to a January runoff in Georgia, after both fell short of a majority in the November vote.

The two runoffs in the state — this race and the special election for the state’s other Senate seat — will decide control of the Senate on Jan. 5. Republicans hold a narrow edge in the race for a majority, but they are currently short, with several races still undecided. With Joe Biden appearing to be on track to win the presidency, victories in both Georgia races would likely hand Democrats control of an evenly split 50-50 Senate.

The dual overtime races will undoubtedly drive national attention and money back into the state over the next two months.

Ossoff, an investigative filmmaker, entered the race against Perdue late last year with unusual name recognition and fundraising ability after narrowly losing the most expensive House race in history in a 2017 special election that became an early Trump-era rallying point for the Democratic Party.

Ossoff and Perdue, a former executive at several Fortune 500 companies, had to compete for attention with candidates in Georgia’s other Senate race, but Perdue’s drive for a second term got closer and closer in the polls throughout the summer, until the two men were running neck-and-neck in the fall, along with the presidential candidates.

Ben Fry, Perdue’s campaign manager, described Perdue’s lead on the November ballot — which was around 2 percentage points — as “commanding.”

“Jon Ossoff does two things well: burn through out-of-state liberal money and lose elections,” Fry said. “Georgians will now get to watch him do both again.”

Perdue, a staunch ally of President Donald Trump, sought to tie Ossoff to the Democratic Party’s left flank, going so far as to claim inaccurately that the Communist Party had endorsed the Democrat. Ossoff attacked Perdue’s stock trades while in office and criticized his position on health care, part of a broad Democratic effort to attack Republicans with past votes that would have repealed health insurance regulations that protect people with preexisting conditions.

Perdue has touted his influence with the Trump administration while also trying to appeal to Atlanta-area swing voters turned off by the president. But Perdue campaigned with Trump in the run-up to Election Day — drawing national attention when he mocked the pronunciation of Democratic vice presidential nominee Kamala Harris’ name at an Oct. 16 rally.

While national Democrats avoided wading into Ossoff’s primary earlier this year, party donors opened up their wallets throughout the third quarter of 2020, and Ossoff outraised Perdue by a margin of almost 4-to-1. He focused much of his campaign on health care, including prescription drug prices and the government’s handling of the Covid-19 pandemic, and on Perdue’s closeness to Trump.

“Change has come to Georgia, change is coming to America, and retirement is coming for Sen. David Perdue,” Ossoff said in remarks Friday morning. “Because a majority of Georgians have stood up to reject his request for a second term.”

Trump won Georgia by 5 percentage points in 2016, but this race became a test of just how much the state had shifted amid demographic change and increased voter registration.

Georgia’s secretary of state said Friday morning that there will be a recount of the state’s presidential votes, as Biden took a narrow lead of a few hundredths of a percentage point over Trump.

“With a margin that small, there will be a recount in Georgia,” Secretary of State Brad Raffensperger, a Republican, said at a Friday morning press conference. “Interest in our election obviously goes far beyond Georgia’s borders. The final tally in Georgia at this point has huge implications for the entire country.”