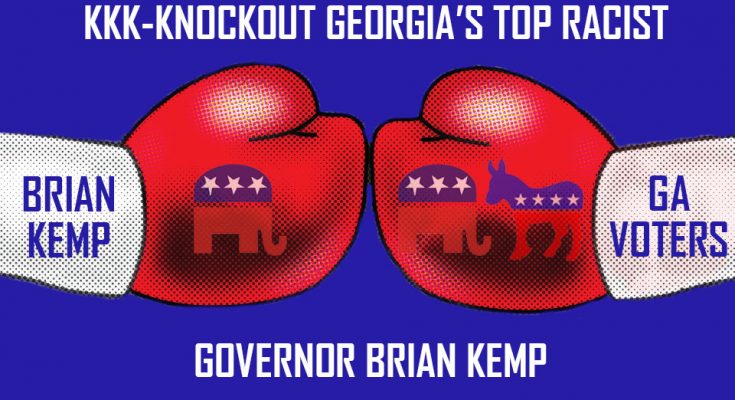 March 29, 2021 – Lawrenceville, Georgia | When you start hiding behind closed doors and using police to protect you from a Black woman knocking on your office door as you sign away measures in your state that make voting easy, it is time for you to be knocked out of office. And that is exactly what Cheryle Renee Moses is leading the charge to do in Georgia right now.

“Georgia is the testing ground for all Republican-led voter suppression tactics in the United States. That is a fact. Once voter suppression strategies work in Georgia, they are then rolled out across this country by Republicans,” said Cheryle Renee Moses, Blacktivist, Georgia native, founder of the anti-racism movement ‘Come Meet A Black Person’ and publisher of Black Gwinnett Magazine.

Ironically, the Republicans are the ones who originally crafted and passed the previous vote by mail laws in Georgia giving voters convenience in casting their ballots. In 2005, Republicans gained control of Georgia state government after decades of Democratic domination. Georgia HB 244 was a 59-page bill that contained over 65 revisions of state election code, with two major changes: adding a photo ID requirement for in-person voting and allowing Georgians to vote by mail without an excuse or ID.

Up until 2020, mail-in ballots in Georgia have given the Republicans a voting advantage. On Thursday, March 25, 2021, Georgia Governor Brian Kemp signed in to law The legislation, which followed Democratic victories that flipped the state at the presidential and Senate levels, comes amid a national movement among Republican-controlled state legislatures to mount the most extensive contraction of voting access in generations. Seeking to appease a conservative base that remains incensed about the results of the 2020 election, Republicans have already passed a similar law in Iowa, and are moving forward with efforts to restrict voting in states including Arizona, Florida and Texas.

“We’re talking about a man who has suppressed the vote in Georgia for years, stole the Georgia governorship in 2018, defied common and science sense with COVID-19 putting citizens at risk of infection and death, and now showing up as the top Georgia racist by signing KKK-1960-style voting laws in 2021. Kemp has got to go. We cannot wait until November 2022.

The recall election process is laid out in Title 21, Section 4 of the Georgia Code. And yes, the Georgia process is presented as difficult by design. But we are critical thinkers, movers and shakers and citizens who will not stand for this.

We are reaching out to all citizens and organizations who serve people in Georgia who know these new voting laws in our state are arrogant, f-you, let’s stop the Black vote strategies to join us in this effort. This is not about democracy. These new laws are about maintaining white supremacy and white privilege in the political system of Georgia. And that is institutional racism.

HOW TO GET INVOLVED?

We have a step-by-step process for getting our 1,250,000 voter signatures needed to get recall election for Georgia Governor Brian Kemp. We just need YOU – A GEORGIA VOTER REGISTERED SINCE OCTOBER 1, 2018 in the fight with us!

REQUIREMENT TO BE A RECALL KEMP SPONSOR

To be an official sponsor of this recall initiative, you must be an active registered voter in Georgia and registered before October 1, 2018. Become a sponsor NOW.

SIGN UP TO BE A RECALL KEMP SPONSOR NOW.

After we have our 100 sponsors and the Georgia Secretary of State approves our application for a recall petition, we will have three months to get 1,250,000 signatures from districts throughout the state. More information, join our mailing list.

STEP #3: Donate To Our Efforts

We need money donations to finance this effort. Donate $5, $10, $20, $50, $100 to this effort. This is not a small task and it will be challenging. But nothing comes without working had to accomplish it. And we’re up for this challenge and will get it done!

Cheryle Renee Moses is a Blacktivist and founder of the “Come Meet A Black Person” Anti-Racism movement and organization and publisher of Black Gwinnett Magazine.

Sell Your Home Faster and for More Money