Revered But Racist: The Whitewashing of Mahatma Gandhi 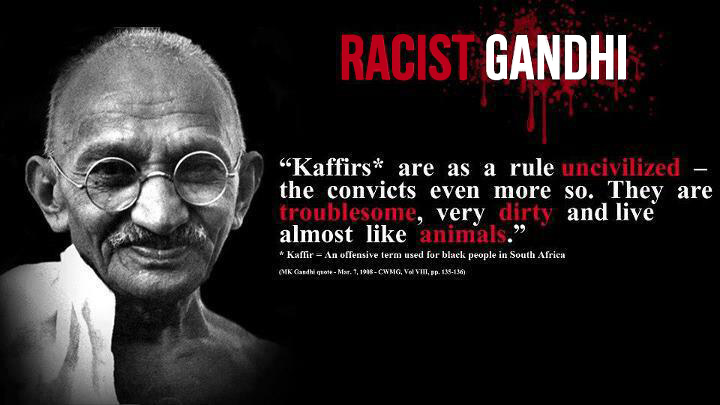 “Thousands of books have been written on the significance of Mahatma Gandhi as a man of faith and as an exemplary voice, active, presence, and source of influence in the struggle for justice, peace, and human dignity. Gandhi is also among Hinduism’s most celebrated saints and sages, and his place in the pantheon of great religious thinkers and activists is well established…. G.B. Singh and Tim Watson challenge these images of Gandhi while suggesting the need for a re-examination of his importance as an historical figure.

In “The South African Gandhi: Stretcher-Bearer of Empire,” a book written by Ashwin Desai and Goolam Vahed, professors at the University of Johannesburg and the University of KwaZulu Natal, it is revealed how Gandhi kept the Indian freedom struggle “separate from that of Africans and coloreds even though the latter were also denied political rights on the basis of color and could also lay claim to being British subjects.”

“Everything written in the book is true, there’s no doubt about it,” says Tushar Arun Gandhi, Mahatma Gandhi’s great-grandson. “There’s no way around it: Gandhi was a racist,” says his biographer Ramachandra Guha. “Gandhi as a young man went with the ideas of his culture and his time. He thought that Europeans are the most civilized. Indians were almost as civilized, and Africans were uncivilized,” Guha, 61, told NPR in an interview.

While Mahatma Gandhi was a religious leader deeply revered for his non-violent approach to equality for Indian people, his attitudes on Africans are racist and his sex revelations are outrageous.

For many, the history of Mahatma Gandhi has been whitewashed. Gandhi statues are being removed around the world. Join us on Wednesday, August 19 at 7:00pm EDT – World Humanitarian Day – as we come together to discuss Mahatma Gandhi — the good, the bad and the ugly.