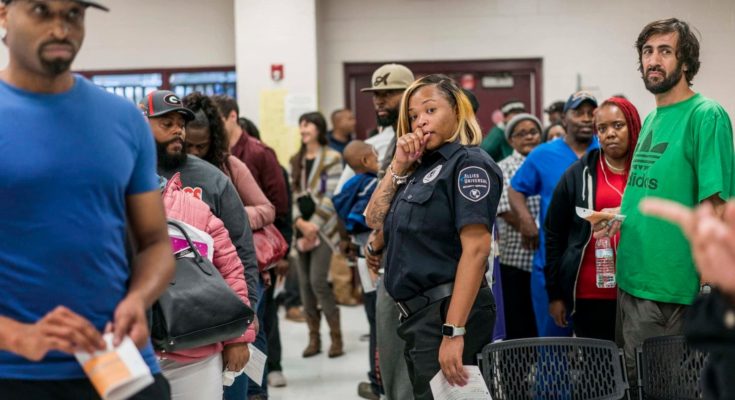 A federal judge has barred the Georgia secretary of state’s office from immediately certifying election results in the state to allow more time to address questions about thousands of provisional ballots that voters were forced to cast last week.

The ruling in the suit brought by Common Cause injected more days of uncertainty into the hard-fought Georgia governor’s race, in which Democrat Stacey Abrams is hoping to force a runoff with Republican Brian Kemp, who is leading by about 59,000 votes.

Tuesday was the deadline for Georgia’s 159 counties to finalize their elections results, and the secretary of state had planned to certify those results Wednesday. But U.S. District Judge Amy Totenberg said late Monday that the secretary of state’s office could not certify results before Friday and that it had to “immediately establish and publicize on its website a secure and free-access hotline or website for provisional ballot voters to access to determine whether their provisional ballots were counted and, if not, the reason why.”

Kemp, who resigned as secretary of state late last week and declared victory, said that there are not enough outstanding votes to keep him from claiming the office. Lauren Groh-Wargo, Abrams’s campaign manager, told reporters that as of Tuesday, Abrams needed 20,595 votes to force a runoff and 18,259 to initiate a recount.

The secretary of state’s office has reported that 21,190 provisional ballots were cast in the Nov. 6 election. The Abrams campaign has said the number is more than 27,000. Voters are given provisional ballots if their registrations don’t show up in voter rolls at their precincts or if they don’t have proper identification.

Voting rights were a major issue in the governor’s race, in which Abrams, a former Democratic leader of the state House, was vying to be elected the nation’s first black female governor. Kemp was criticized by Abrams and activists for championing strict voter registration and identification laws.

On Tuesday morning, in a separate case, a federal judge ordered Gwinnett County to stop rejecting absentee ballots with missing or incorrect birth dates. The ruling by U.S. District Judge Leigh Martin May addresses concerns raised by voting rights advocates on behalf of several voters and by Carolyn Bourdeaux, the Democratic candidate fighting who challenged Rep. Rob Woodall in the state’s 7th Congressional District. Bourdeaux is hoping to either overtake Woodall in the vote count or force a recount. Bourdeaux’s campaign estimates that 900 to 1,000 ballots are at issue.

The Abrams campaign is scheduled to be in federal court Tuesday afternoon to ask a judge to order counties to count some absentee ballots that have been rejected because of minor errors or because a voter was made to cast a provisional ballot because their current addresses do not match what is in the voter registration data base.

Totenberg, who also is overseeing a lawsuit to force the state to abandon its electronic voting machines in favor of paper ballots, said in Monday’s ruling that Common Cause has “shown a substantial likelihood of proving that the Secretary’s failure to properly maintain a reliable and secure voter registration system has and will continue to result in the infringement of the rights of the voters to cast their vote and have their votes counted.”

“Today’s ruling is a victory for the voters of Georgia. We are all stronger when every eligible voter is allowed to participate in our elections,” Sara Henderson, executive director of Common Cause Georgia, said late Monday in a statement. “This victory helps achieve greater voter confidence in our elections.”

During phone call with reporters Tuesday afternoon, Groh-Wargo said that “every hour and day that goes by, additional votes get process” and the gap between Abrams and Kemp continues to narrow.

The Common Cause suit refers to testimony from Chris Harvey, the state director of elections, that typically only half of the provisional ballots cast will probably be counted because of problems.

It also cited concerns over the security of the state’s voter registration database, an issue that has arisen more than once during Kemp’s tenure, including the Sunday before the election. Kemp’s office issued a news release accusing the state’s Democratic Party of a “failed attempt” to hack the system. It turned out that activists were attempting to alert the secretary of state’s office that the database was vulnerable to hacking.

In her ruling, Totenberg rejected an assertion by the secretary of state’s office that it needed to move up the certification date because of the need to prepare for a runoff between the candidates for secretary of state, neither of whom received more than 50 percent of the vote on Nov. 6. The law states that the secretary of state has up to 14 days after the election to certify, which would be Nov. 20.

Totenberg said the secretary of state’s attempt to expedite certification “appears to suggest the Secretary’s foregoing of its responsibility to confirm the accuracy of the results prior to final certification, including the assessment of whether serious provisional balloting count issues have been consistently and properly handled.”

Voters had until Friday to prove that they were duly registered or to prove their identities. The lawsuit names voters who said they were not given proper information about how to fix their ballots.

Tuesday’s ruling in the Gwinnett case came a day after Bourdeaux, the Democratic congressional candidate, filed an emergency motion asking that the county be required to count ballots of voters who were properly registered but whose ballots were rejected for minor discrepancies. The suit argues that voters should be given the chance to correct issues flagged by county elections officials. The lawsuit refers to 323 affected ballots.

The most recent tally on the secretary of state’s website shows Woodall with 50.16 percent of the vote to 49.84 percent for Bourdeaux. The unofficial results show Bourdeaux trailing by 901 votes.

In late October, May ordered Gwinnett to stop summarily rejecting ballots for “perceived signature discrepancy,” which the judge said was being made by elections staff on a “subjective and arbitrary basis.” That ruling came after voting rights advocates became alarmed that a large number of absentee ballots were being rejected by Gwinnett elections officials.

Voters of color make up a majority of residents in Gwinnett, and voting rights groups said ballots of minority voters were being rejected at a higher rate than for white voters.

“For the public to have confidence in this election cycle, it is critical that every vote be counted and every voice be heard,” said Kristen Clarke, president and executive director of the Lawyers’ Committee for Civil Rights Under Law. “Yet officials in communities like Gwinnett County remain bent on erecting unnecessary barriers to bar the counting of absentee and provisional ballots, particularly those cast by minority voters.”

The Lawyers’ Committee filed the motion Sunday in partnership with the Coalition for Good Governance.

On another front, Sarah Riggs Amico, the Democratic candidate for lieutenant governor, sent a letter to the secretary of state’s office raising concerns about an “unusually high rate” of drop-off in votes cast for her race compared to those for other statewide races.

Amico’s letter says that most troubling is the contrasting drop-off rate for votes cast on paper, 1 percent, and those cast on the state’s electronic voting machines, about 7 percent.

“These stark anomalies indicate serious inadequacies in the administration of the 2018 General Election,” Amico wrote. The letter goes on to say that although Amico doesn’t expect the residual votes to affect the outcome of the race, officials need to investigate to ensure that machines are functioning properly for the upcoming Dec. 4 runoff for some contests, including the one for secretary of state.

On Tuesday, police arrested more than a dozen protesters, including Georgia state senator Nikema Williams (D), during a demonstration at the state Capitol. The protesters chanted “Count every vote!” and were arrested because they refused police orders to disperse.

Correction: An earlier version of this story incorrectly said that candidate Carolyn Bourdeaux was trying to force a runoff in her contest. No runoff is possible in her race; she is trying to either overtake her opponent in the vote count or force a recount. The story has been corrected.